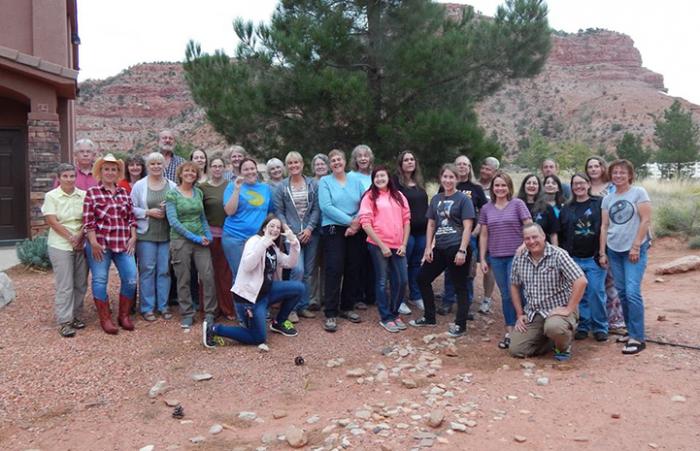 There’s a little bit of magic that makes a great group really gel. For this group, that magic is Best Friends.

“It restores my soul. It’s peaceful, and I feel like I am doing something good.” –Joni Parker

It started with a few people who got to know one another while volunteering at the Sanctuary and agreed to keep in touch through Facebook. From there, they started planning volunteer trips at the same time so they could see each other again.

They invited another person, then another, and now the group that has come to be known as the “Faceook ladies” (though men are welcome, too) has turned into a group of 20-40 people who come together to do what they love: volunteer with animals.

Something to look forward to 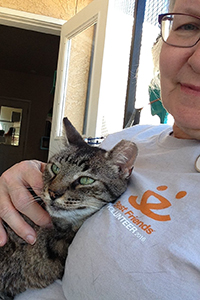 Joni Parker, who lives in Nebraska, is one of the group’s original members. She had already found her niche as a Best Friends volunteer in Cat World. But, she says, the idea of staying in a large house with a group of other enthusiastic Sanctuary volunteers appealed to her. She hopped onboard for the first coordinated trip with her new friends, and ever since she has spent one week a year with the group. Sometimes they all stay together in the same house and sometimes they don’t. But there is always at least one big gathering, and many of them end up volunteering together.

“It is just magical here,” Joni said during the most recent trip. She’s volunteered in other animal areas but always comes back to Cat World. “It restores my soul. It’s peaceful. And I feel like I am doing something good.” As for the group, she says: “We’ve made it a tradition. It’s something to look forward to.”

New friends support each other 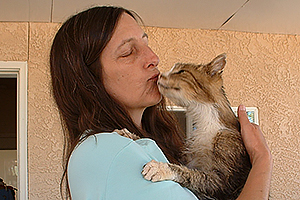 Like Joni, Edie Hanisch volunteered at the Sanctuary long before she joined the Facebook group. “I knew this is one of the places I really wanted to support and be around,” she says. Then, a friend told her about the Facebook group. “She knew I’d like it,” says Edie, who then joined up. “I’ve met some good friends through the group.”

Edie has a soft spot for cats with special needs, and she remembers one cat in particular who helped solidify her bond with the group. Wolfi was once a scrappy cat who preferred to spend all his time up in the rafters of his room. But he not only came around in his later years, but he grew to love riding around with one of his caregivers in a baby sling. Of course, Wolfi also won the volunteers’ hearts.

When old age and declining health led to Wolfi passing away, Edie and several others from the group traveled to the Sanctuary for his placement at Angel’s Rest.

“That drew the group together,” Edie says. “We’ve all been friends ever since, and we all support each other. The group is growing and keeps getting better and better.” 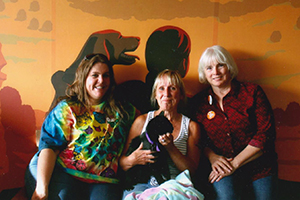 Debi Mykitiak didn’t join until the group’s third annual trip. Like the others, she’d been to Best Friends before (the first time in 2009), and since then she's made 14 trips back to the Sanctuary. That included one frosty New Year’s Eve trip, when she helped to feed horses in below-freezing weather. But she loved every minute of it.

During one of her trips, she became friends with some of the group’s founding members and, as Debi recalls, “It boomeranged from there.” She says that the group attracts many people interested in animal rescue, and that it’s been a great way to network.

Above all, Debi cherishes the connections she’s made through the group, as well as the camaraderie. “It brings people together — everyone having the same mindset of wanting to do something to help.”

The Facebook ladies group is free-flowing. If members can make the trip to the Sanctuary during the chosen week, they do. While they are here, they volunteer as much as they want, in whatever animal area they want. They stay together or at least get together for a big meal and some laughs.

And then they all go home and stay in touch online, where they share their memories of the Sanctuary and begin planning the next year’s trip.