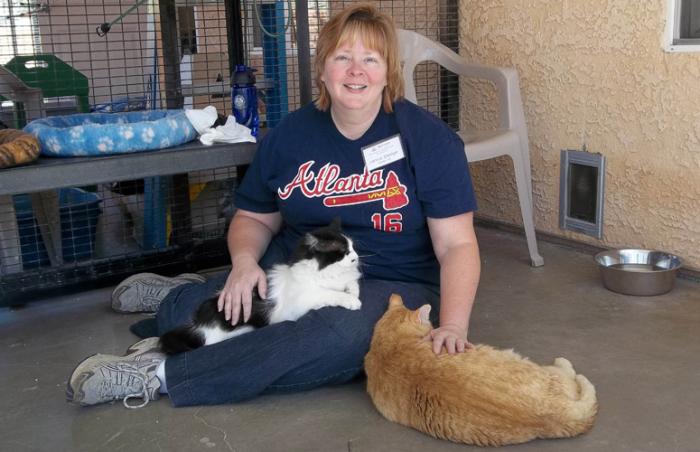 Inspiration can be a funny thing. It can hit you in the most unexpected way, as it did Janice Sledge after she attended Best Friends' most popular workshop.

It was December 2011 when Janice first noticed a Best Friends magazine in her doctor's office and was instantly drawn to the positivity. However, it was an advertisement promoting upcoming workshops that caught her eye. After having volunteered for a few animal welfare organizations in Atlanta, Georgia, she dreamt of one day opening a cat sanctuary for felines whose elderly people have passed away. On New Year's Day, she was researching flights and quickly registered to attend the June 2012 How to Start and Run an Animal Sanctuary workshop.

How to Start and Run an Animal Sanctuary workshop 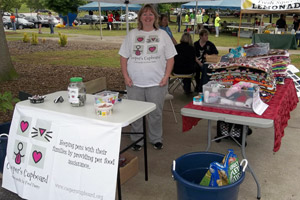 Held at our Sanctuary in Kanab, Utah, the workshop explores topics such as setting up a nonprofit, animal care, fundraising, risk management, and much more. She soaked in all they taught, and realized all the skills she had learned in her 30 years of working a variety of administrative and analytical jobs in corporate America were a huge asset to running a nonprofit. She even spent two half-days volunteering in Cat World, spending time with the felines and shadowing the caregivers. However, being a decade away from retirement, she realized her dream of providing a haven for cats would have to wait.

But when alternatives to starting a sanctuary were discussed, inspiration struck. Janice realized she could start making a difference for animals immediately by starting a pet food pantry.

"I thought this was something I could do while I had to continue to work full-time," recalls Janice. "On the plane back to Atlanta, I was already making notes, figuring out what I needed to do, where I needed to go, and what was going to be required to set up a pantry."

Cooper's Cupboard, named after one of Janice's five cats, was incorporated by August, and she soon started soliciting pet food donations. She received her 501(c)(3) nonprofit status in January 2013, and with plenty of food stockpiled, began accepting applications from those needing help. Incredibly, Janice's goal to start a nonprofit took only one year from original concept to fruition.

"I was driven when I came back and did not want to waste any time," says Janice. "I was so fired up about the idea that I just hit the ground running." 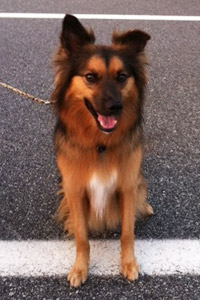 Janice's guest bedroom serves as the actual cupboard. Set up like a miniature store, wall-to-wall shelving holds bags and cans of pet food, separated into dog and cat areas and organized by expiration date. And all that food has assisted nearly 200 animals. However, there's one dog, Kylie, who stands out.

Kylie's person stopped by the Cooper's Cupboard booth at a local adopt-a-thon. She wanted to get some information for a neighbor, but once Janice started talking to her, she discovered the woman was unemployed and struggling herself. The woman completed an application, and Janice was able to provide dog food for her on the spot.

"It meant the world to me to be able to have the application and the food in my truck so I could help her immediately," says Janice. "It gives you chill bumps because that is what we're trying to do."

Next goals: Low-cost spay and neuter program and cat sanctuary

She's not done yet. Janice will be attending our No More Homeless Pets Conference in Jacksonville, Florida, in October to network and learn even more. Her next goal is to start a low-cost spay/neuter program, plus she hasn't given up on her dream to open a cat sanctuary.

For now though, the pet food pantry is keeping her busy, especially since this go-getter is already planning to expand. "I'm going statewide," says Janice. "It's just a matter of time."

Help animals by volunteering at Best Friends or locally.