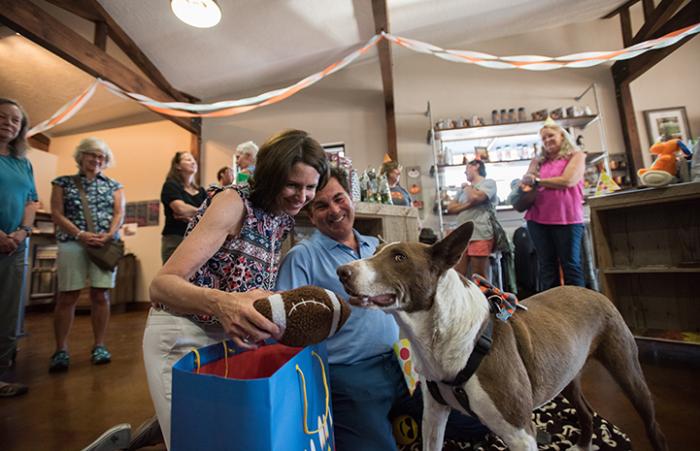 Birthday celebration for Google the dog

On the night of Google’s 10th birthday party, the handsome brown-and-white dog was surrounded by friends and showered with gifts. It was a beautiful evening with a sky full of stars and a room brimming with laughter and good cheer. Dogtown caregivers and volunteers sang Google’s praises and told sweet and funny stories about him. But as magical as the party was for Google and his guests, it was far more than a celebration. It was a testament to how deeply one dog has touched the lives of those who love him.

Barriers to finding a forever home

People who meet Google often ask why he hasn’t yet been adopted. Google is gentle and kind and seems to understand people’s emotions the way only an “old soul” can. He came to Best Friends badly injured when he was three years old. He’d lived on a chain and had become an expert at breaking free, though not without serious injury.

Though he recovered, Google can’t ever wear a collar, and his neck is still sensitive and prone to reinjury. Chiropractic treatments at the Sanctuary keep him feeling his best.

Google is also a senior dog now — with some senior dog issues, such as minor incontinence and hearing loss. But perhaps the biggest barrier to finding a home of his own is that Google isn’t very fond of other dogs. While he does well with some dogs (and has occasional play dates at the Sanctuary), he’d prefer to be the only dog in a home.

That’s why Jack and Susan Russell, Best Friends volunteers and supporters who are Google’s biggest fans, can’t adopt him. They already have two dogs at home. But that hasn’t stopped them from forming a friendship with Google that has already spanned two years and more than 2,000 miles. 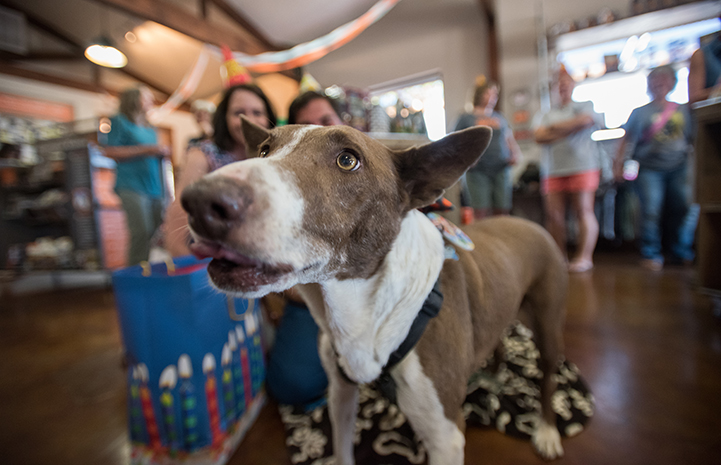 Jack first met Google during a brief retreat at Best Friends. He’d just finished some challenging business travels and decided to do a little volunteer work at the Sanctuary to restore his energy and spirit. In Dogtown, he was introduced to Google and the two set out for a walk.

“Google gave me a look as if to say, ‘Tired traveler, it is you who needs a relaxing stroll,’” Jack says. “He took me into his world on a sun-drenched October day with a soft desert breeze at our backs. There were no decisions to be made on my part, for he knew the path. As we walked silently and he ambled on gently and gracefully, I felt peace and relaxation. I knew that I had found a good friend — a best friend.”

Though Jack was saddened to hear about the dog’s past, that wasn’t the only reason he was touched by Google. “As he became my friend, I realized that Google is selfless,” he says. “He makes others (visitors or caregivers) feel like they are at home in Kanab. He connects us all.” 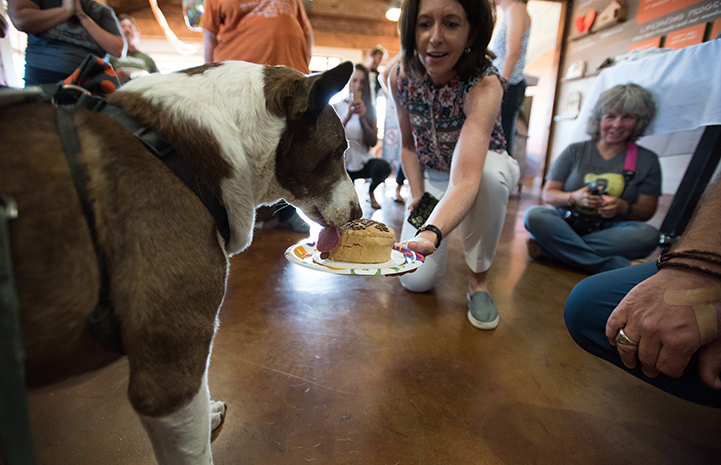 From a gathering to a gala

Ever since that first day with Google, Jack has on his office desk a photo of him and Google together. A year after meeting Google, he brought Susan to the Sanctuary to meet him, and she fell in love with him, too.

Twice a year, the Russells return to the Sanctuary from Washington D.C. to reconnect with their beloved friend. This summer, they took an extra trip after learning from Google’s caregivers that he wasn’t acting like himself. Though he wasn’t sick or in pain, he seemed to have less energy and enthusiasm. It could have been his age, or it could have been that Google simply needed a change of pace.

Jack and Susan thought of what they could do for Google, and began planning to sponsor and host a party to make him feel extra special. The idea was for a few people to get together and have dinner with Google, but as the word spread among Google’s friends, a small gathering quickly turned into a gala. 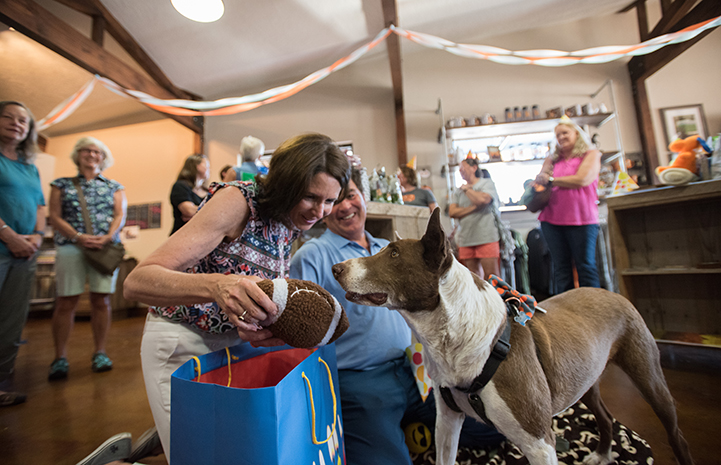 On the night of his party, about 30 Dogtown caregivers and volunteers gathered to honor Google at the Best Friends Visitor Center in Kanab. There were two cakes (one for the humans and one for the birthday dog), cards, presents (including a monogrammed coat from his caregivers) and a livestream on Facebook. But best of all, Google was basking in the love of all his people. Even though he is usually a bit shy, he posed for photographs and he greeted every person there.

“Google was so excited to see all the people at his party. It was like he went around to each person to greet them and thank them for coming. He definitely had a smile on his face all night long,” says Dee Willner, local Best Friends volunteer who made Google’s doggie cake.

Why go all out for Google? “It truly explains how remarkable Google is,” Jack says. “I wanted to give back to my best buddy who has been so giving to others — and to me.”

“We had a wonderful time with his 10th birthday party and it was heartwarming to hear his former and current caregivers share their Google stories,” says Susan. “I've enjoyed getting to know Google and his peaceful and gentle personality, and seeing the playful side of him come out as well.”

Check out other single pets at the Sanctuary 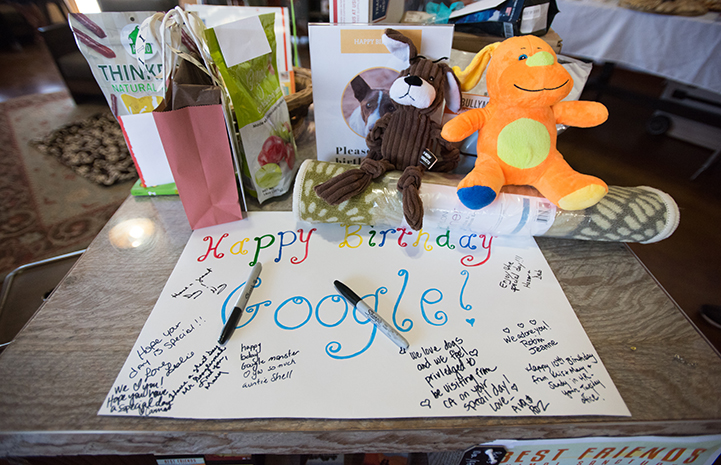 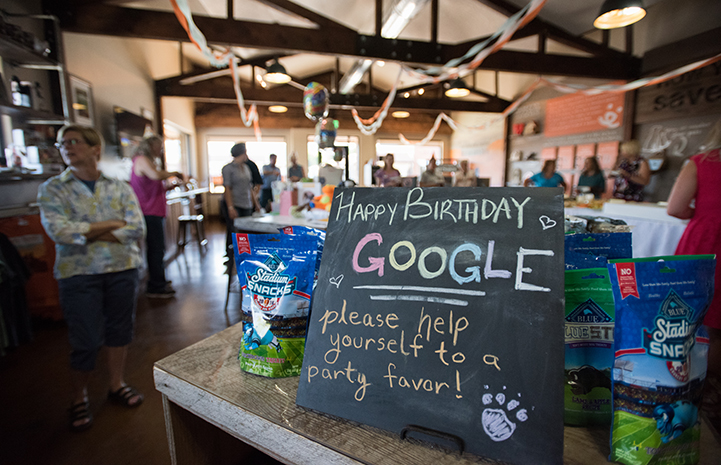 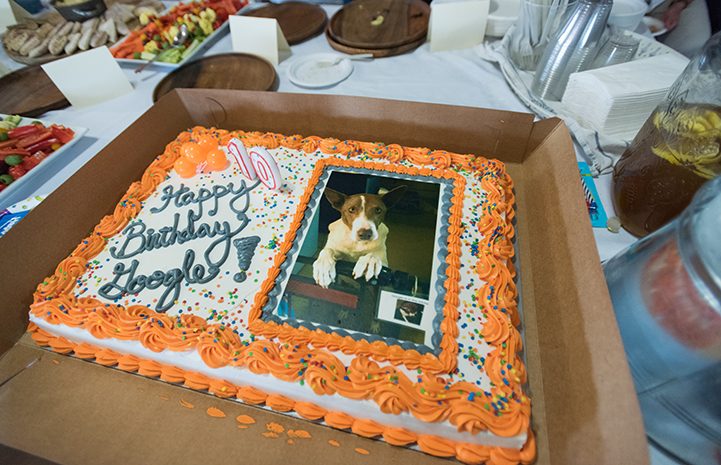 “Google hit the jackpot when Jack and Susan Russell met him. They fell in love with him as much as he fell for them,” says Dee, who calls Google’s party “the most amazing gift of the heart.”

The party did for people what Google often does on his own — bring them together and make them feel happy. And it reminded Google that even though he hasn’t yet found his forever home, he has some amazing forever friends. 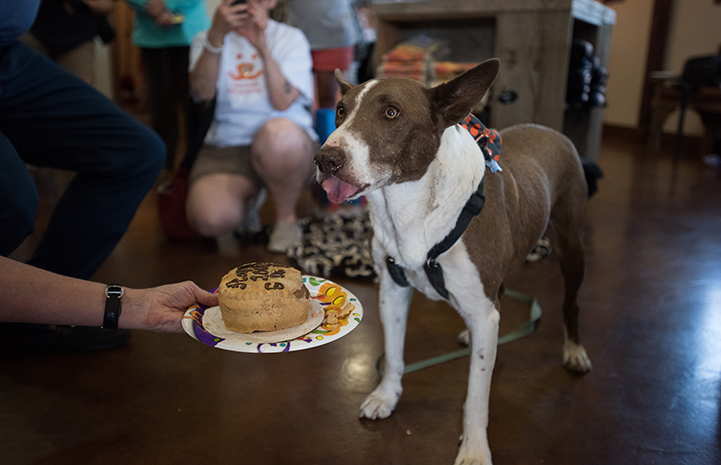