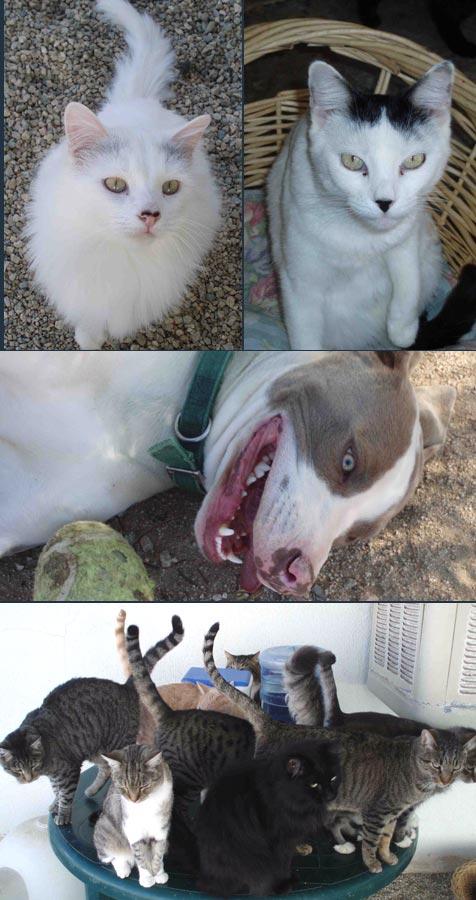 Looking for better ways to tend to its animals and find them forever homes, C.A.R.E., a sanctuary in the high desert of southern California, recently contacted Best Friends for help with assessing and training its dogs and cats.

Caring for 200 animals at C.A.R.E. sanctuary in California

Three caregivers and just one volunteer one day a week are spread thin caring for about 200 cats and dogs. They take in special-needs cats and dogs who are examined and treated by a veterinarian who visits the sanctuary once a week.

"We do everything for them," says Joanna Patrice, the Hollywood actress who co-founded C.A.R.E. (Cat & Canine Assistance, Referral and Education) 11 years ago. "We do dentals, [and] we have a leukemia section and an FIV section. We don’t discriminate based on age or physical condition or so-called adoptability. They’re all precious, individual beings to us."

In a span of two nonstop days at the sanctuary, Best Friends animal care and behavior consultant Sherry Woodard assessed 19 dogs and 165 cats.

One of the residents she met was Rex, a pit-bull mix she spent time with. "Wow," Sherry says, "he is super sweet, super cute, well behaved and very kissable." And he loves to play fetch, says Joanna. "I played ball with him this summer. He came barreling toward me with the ball in his mouth. He loves it."

It’s those ball games and one-on-one time with the dogs and cats at the no-kill, cage-free sanctuary that operators want to see more of.

Helping the cats and dogs

"We’d love to have people come up and play with the animals," says Joanna, C.A.R.E.’s current outreach director. "We need volunteers."

With the goal of making the animals even more adoptable, Sherry suggested sleepovers and car rides for the dogs. "It makes quality of life better for every animal," she says. "It helps them go out and experience life with people they know and build on it so they can go home."

She also spent time with the caregivers. "Sherry worked with the staff, training them, and then she worked with each and every dog," Joanna says. "She gave us a rundown of their personalities. She gave suggestions about their weight and their diets. The big thing is she said we need donations and we need volunteers."

With today’s lean economy, that’s a tall order. Still, Sherry’s advice is being taken to heart. "We’re going to try to address every single one of the issues she suggested," says Georgia Brewer, C.A.R.E.’s president. "We’re still struggling and trying to get it together."

But they have a great base from which to work with their current employees, whom Sherry described as "wonderful, dedicated people. They have amazing animals and an amazing staff."

And that’s why Sherry says she’ll continue giving them the moral support and advice they need. "We’re looking to support them any way we can to help grow their support base."

Because the animals love attention, the more people involved at the sanctuary, the better. "Speaking for us [at Best Friends], we constantly need a bigger team. We rely on our membership," Sherry says.

The end result will be a win-win situation for C.A.R.E. and for pets like Rex. Sherry says, "We’ll help them and, hopefully, together we’ll be a bigger team overall. Changing the world takes all of us."

Adopt your next pet.

Photo of Sherry courtesy of C.A.R.E. All other photos by Sherry Woodard