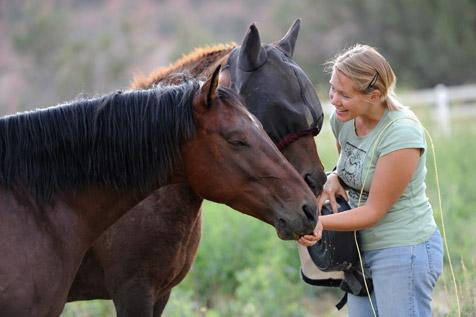 Below are the stories of favorite animals from around the Sanctuary caregivers most want to see adopted this year.

Orlando the dog has become popular over the years. "Volunteers really love him," explains caregiver Terry Tate. Several years ago, though, Orlando had a reputation for being something of a handful. "He was always sweet, but he was pretty rambunctious," Terry says. These days, Orlando has left behind some of that high-energy behavior that can sometimes deter potential adopters. "He is definitely ready for a home," says Terry. 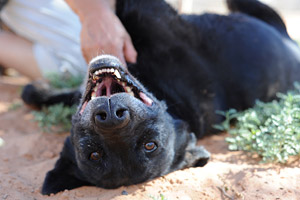 If you have access to a permanent swimming pool and want to be a hero forever, Lili Beauty the dog would love to meet you. "She would swim every day of the year if she could," says caregiver Kathy Gray. Don’t worry, though, she’s fine waiting until summer for swimming as long as she has the one thing she loves more than a good splash: somebody to love. "She just wants a person," Kathy explains. "Lili Beauty would love to curl up on a sofa with you and sit there all night long. She’s a sweetheart."

There’s something about a dog who knows what she wants and isn’t afraid to go after it. And what does Cindy the dog want? "Your undivided attention," says caregiver Betsy Kidder. Betsy has lovingly dubbed Cindy "The Mouth" because of her constant clamoring for affection when you come near her. Cindy enjoys visiting with caregivers and volunteers, and likes going for walks when not on the receiving end of a belly rub. "She needs to go home because she is such a good dog," says Betsy. "She’s got so much personality to give somebody." 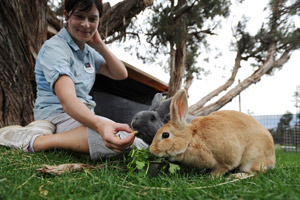 Over at the Bunny House, you don’t often see as many animals rushing up to the fence to greet you as in other areas of the Sanctuary. Sometimes rabbits can be a bit more subtle when showing affection. Honey Bunny and Jerry are the exception. They run over to say hello. "It’s almost like they’re asking for a home," explains caregiver Michele Page. For example, when visitors come into their play area, Honey Bunny hustles over to tug on their pant leg. "They have people skills, so they need to be around people," Michele says.

Walter, one of the young rabbits at Best Friends, is so full of enthusiasm for life that he runs around and jumps for joy (does "binkies") all the time. "He’s so happy," says caregiver Robin Sunleaf. "He’ll perform some of the most amazing binkies you’ve ever seen." Robin hopes this friendly little guy finds a home in 2012. 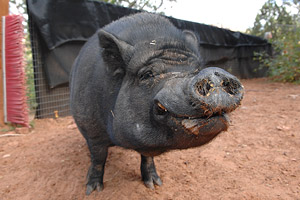 Down at Horse Haven, home to horses, pigs, goats and more, it’s no easy task even figuring out which species, let alone individual animal, to pick as an adoption hopeful. That said, caregiver Adria Johnson really hopes Jeffery the pig will find a home this year. "He’s so easygoing," she explains. "He doesn’t seem to have any problems with anybody." One of Jeffery’s favorite activities involves flopping over for a big scratch whenever a visitor comes to say hello. He’s as easy to please as he is to love.

Caregiver Ronnie Gentry is especially rooting for Emily the goat to find a home in 2012. "We call her half Labrador because she’s very friendly," Ronnie says. Emily enjoys being around people whenever possible, and will love you forever if you give her a nice long scratch right on the back. She gets along well with other goats, too, in case you’re looking to give the goat in your life a friend. A huge fan of treats, Emily’s favorites are sunflower seeds and hay pellets. "She wants to be your friend," says Ronnie.

Caregiver Alice Wilkey has a special connection with Sasha the horse. Sasha came to the Sanctuary shortly after Alice started as a caregiver. So, Alice knows as well as anybody how far Sasha has come. "She had no use for humans whatsoever," Alice explains. A few years at Best Friends, however, have made all the difference. "Now she wants attention from anyone who passes by the fence," Alice says. Sasha also gets along so well with other horses that staffers never need to worry about roommate shuffles with her. Sound like the perfect horse? "I think so," says Alice.

In addition to all the delightful animals featured here, there are many other Sanctuary animals, with so much personality and love to give, who are looking for their forever home. The perfect animal is just waiting to join your family.