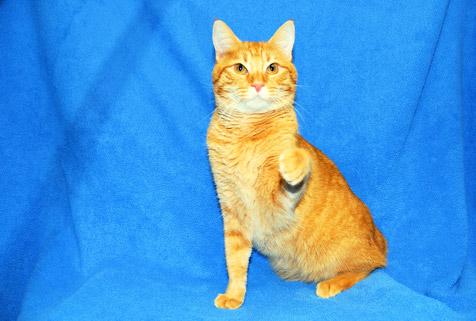 When Sam, a bob-tailed orange tabby, and his sister, Samantha, were dropped off at Abandoned Animal Rescue (AAR) in Tomball, Texas, everyone expected these two young cuties to be snatched up right away. Samantha found a home quickly, but not Sam. Sam was exhibiting some unusual behavior.

Sam was not using his litter box properly when he urinated. At first, the rescue thought it was because he wasn’t neutered. But after his neuter surgery, he was still missing the box. He was then diagnosed with feline urinary tract disease and put on a special diet. Still his issues persisted. He was then diagnosed with lower motor neuron bladder, a condition associated with tail injuries where damage results in paralysis of the muscles that allow for normal elimination, and was put on a routine of acupuncture and laser therapy — treatments made possible by a generous donor. Against the advice of other veterinarians who had made the suggestion that Sam be put down, AAR would not abandon their commitment to the sweet cat.

Mary, AAR’s co-coordinator for the cat department, continued to hold out hope that Sam’s condition would someday be successfully managed and held onto the image of Sam in a loving home. "We take in as many cats as we possibly can," shares Mary. "Whatever medical issues they have are treated. They have a safe place to stay with us."

Though AAR was doing all they could for Sam, they were concerned it might not be enough. Mary had heard about the Incontinental Suite at Best Friends Animal Sanctuary in Kanab, Utah, for incontinent cats and reached out to see if he could be placed at the Sanctuary.

She was put in touch with Dori Jeurink, a No More Homeless Pets Network specialist, who found out there was currently no room available at Best Friends’ Cat World. Dori was able to offer another avenue for Sam — she could send out a member message to see if someone might want to adopt him. Mary agreed. She wanted to give Sam a shot at getting a family of his own, although she had her doubts that the right fit existed.

A perfect home for an incontinent cat

When Karen Patterson got the email alert from Best Friends regarding an animal looking for a home, she opened it right away. She and her husband were considering adding a canine companion to the family, but then she saw Sam.

"He is adorable and I knew I had to have him," says Karen. "Within days of receiving the email, I was in the car on my way to Abandoned Animal Rescue to pick him up."

Karen’s home is tailor-made for cats of every stripe, even those who might have a litter box issue. To help keep her multi-cat household in tip-top shape, she had her home entirely tiled. Sam’s new home is cat-proof, but interestingly enough, his litter box issues seem to have cleared up. He hasn’t had an accident yet in his new home.

The Pattersons are thrilled with their new family member. Sam is fitting in with their entire cat crew and even has a new best friend — Pepper. They’ve been playing and prowling together since Sam arrived.

Karen’s heart goes out to the animals who need another chance because of an issue. "Every little creature doesn’t deserve to be passed over because they are not perfect," she says. "Sam is perfect to us."

Let’s create a time of No More Homeless Pets together.

Donate to the animals today.