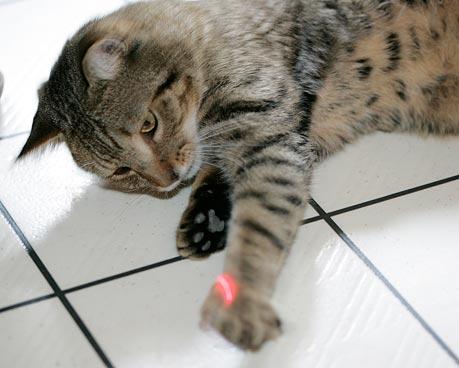 Two cats, Lori and Dimitri, may have chronic upper respiratory infections (URIs), but their chronic sniffles doesn't stop them from disco dancing. Best Friends cat staff discovered an activity neither of these cats can get enough of – chasing the beam of a laser light (something they can run at forever and never catch). It resembles a pen light, and can be purchased at many pet stores. And it could keep these two goofy siblings dancing with delight for hours on end!

Lori and Dimitri came to Best Friends when their person died. They both have chronic upper respiratory infection, which is different from a contagious "kitty cold." It makes them sniffle all the time, but they don't pass it around. In fact, cats with chronic URI make perfectly good pets – some people even find their snortiness kind of cute.

But staff noticed the siblings had more than just this in common. They also share an eccentric streak. Lori likes to play fetch – yes, a cat who fetches! And Dimitri, they say, has just a general "goofiness" about him. So they thought they'd see if they could entertain these two sniffly cats while they wait patiently for homes. Chasing the laser light gives them endless entertainment – like trying to catch the pot of gold at the end of a rainbow. And OK – the humans are feeling pretty entertained as well, watching the cats' antics as they engage in the chase. It's a win-win!

Learn how to manage a chronic upper respiratory infection in a cat.