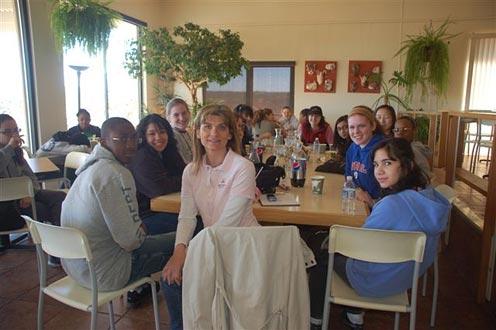 Two years ago, the Safe Humane Chicago (SHC) youth leaders at Walter Payton College Prep worked with humane educators, dog trainers and their teacher to help develop a program to teach grade-school children the importance of treating animals with kindness and compassion, the appropriate way to behave around companion and stray animals, as well as explain the dangers of dog fighting. So far, the teens have presented this program to more than 1,000 inner-city school children.

That’s why, when 21 SHC youth leaders visited Best Friends (SHC’s national sponsor) during their recent spring break, humane educator Jennifer Andrews asked the teens to share their thoughts on a newly developed presentation for the Best Friends School Ambassador Program. To address one of the Best Friends campaigns, "Pit Bulls: Saving America’s Dog," humane education developed this outreach program which targets children attending schools within the vicinity of the sanctuary.

After three days of non-stop rigorous activities, including plotting and clearing new dog-walking trails, scooping poop, cleaning out bird and bunny cages, hiking, and playing with the animals, the youth leaders welcomed a little down time to sit and exchange ideas.

Andrews showed the students a rough draft of a PowerPoint presentation, "All Dogs Deserve Love."

"I’ve been working on this for a couple of months," says Andrews. "And it’s so great to get feedback from a group like yours that’s already out there doing what we’ve only just started."

The SHC youth leaders have discovered the best way to gauge the success of a new project is through the experience of presenting the project. In doing this, they learned what worked well and what didn’t work at all. And as they watched "All Dogs Deserve Love," they found a couple of glitches they’d encountered in their own presentations.

One of the slides referred to breed discriminatory legislation. Several of the students immediately chimed in, suggesting that the issue would be too complex for grade school children. And they knew this first hand, after trying to explain the legislation to a group of eight-year-olds. The teens told Andrews that they learned to use simple language when talking to young children.

Another slide in the program featured a vicious-looking dachshund. The idea was to communicate that dogs generally perceived as sweet can be aggressive and vice versa. Any adult seeing this slide would understand that concept---but not children.

The youth leaders noted that children are very sensitive and can become sad or frightened easily. They suggested to Andrews she take out any "scary" images from the presentation. Even the most graphic messages should be positive.

"They have such great ideas," says Andrews. "I’m so impressed with not just how much they know, but how easy it is for them to communicate. They’re just awesome."

How to approach a dog on a leash

Both the School Ambassador and SHC programs were on the same page when it came to teaching the children how to approach a dog on a leash --- gently, slowly and from the side. Andrews demonstrated by striding quickly over to one student, her face almost touching his, and asking, "How would you feel if someone came up to you ‘in your face’ like this?"

That is nearly the same technique the SHC youth leaders have used in classrooms. Breanne, Kaity and Monica demonstrated to Andrews how they teach children to approach the dog. Since they didn’t have a prop dog or a real dog with them, Monica played the dog owner, Kaity played the child approaching the dog for the first time and Breanne took on the role of dog.

While the SHC group knew much of the material Andrews presented, they took back with them a new puppy mill lesson to incorporate into their lesson plan. Andrews came up with the idea of bringing in a couple of wire crates and asking students how they imagine it would feel to stand on wire without any cushioning beneath.

"I think this could be an effective way of letting children know these dogs deserve to be treated better," explains Andrews. The youth leaders agreed.

Toward the end of the session, Andrews presented the group with a dilemma she faced; one that was fast approaching: How could she possibly spend 45 minutes talking to a group of grade school children about the Vicktory dogs? Andrews is scheduled to make that presentation in the neighboring city of St. George very soon.

Jasmine had the answer: "You break it up into three segments," says Jasmine. "First, you talk about what it means to have a safe environment for animals, then you talking about dog fighting in general, and you end with what’s going on with the Michael Vick dogs."

"Wow," exclaims Andrews. "You know, I think that would work."

As they left the presentation, Andrews thanked the students for their time.

Read about how the former Michael Vick dogs ended up at Best Friends Animal Sanctuary.