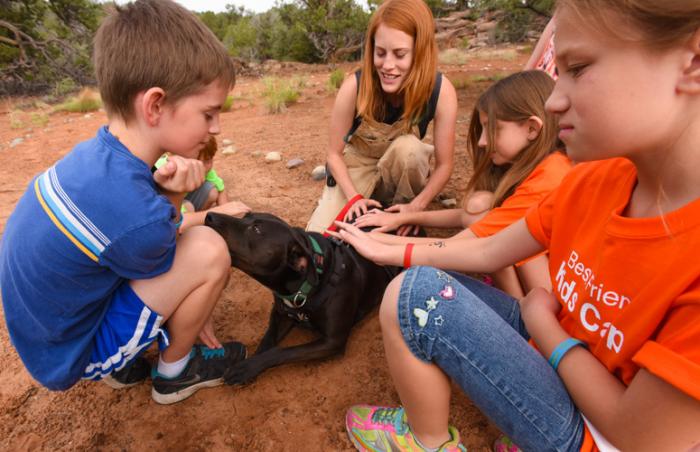 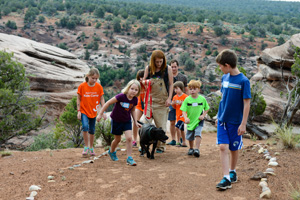 Geneva the dog gets so excited about the Best Friends Kids Camp that she can barely contain herself when it’s her turn to head out with the kids. When she sees the camp van pull up, she starts barking excitedly and running in circles around her yard.

But Geneva knows she needs to sit calmly long enough for one of the camp counselors to leash her up. Then she can climb into the van with the children for a short drive to the trailhead for an outing.

Geneva is one of three lucky Dogtown dogs who go on regular hikes with the Best Friends Kids Camp, because she loves people (especially children) so much. While the camp’s two-legged participants love visiting different areas around Best Friends Animal Sanctuary, the animals they meet have a pretty great time too, and Geneva has come a long way in order to join in on the fun.

Helping a dog with a tumor and other medical issues

Just shy of four years old, Geneva came to the Sanctuary a year and a half ago in really rough shape. With swollen lymph nodes and lumps on her belly, she didn’t feel well at all. The Best Friends veterinary team immediately stepped in to help Geneva. She received diagnostic tests and chemotherapy treatments to get rid of a tumor that was causing the majority of her medical problems.

Though she was feeling much better, she still needed help with basic manners. She just hadn’t been taught that using her paws and mouth weren’t the best ways to make friends with people.

So Dogtown caregivers and trainers taught Geneva how to contain herself, even when she was really excited. With a consistent routine, clear expectations and lots of treats, Geneva quickly learned that getting leashed up led to some pretty great things.

“A year ago she could go for car rides, but couldn’t even get out of the vehicle, because everything was too exciting for her,” says Dogtown caregiver Terry Tate. “She's come miles to be able to go to the kids camp.” 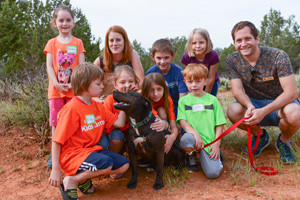 Today, hikes with the kids are Geneva’s idea of heaven. She sniffs the ground and snacks contentedly on the occasional blade of grass along the trail, but her favorite thing is getting love and affection from the kids. Whenever one of them reaches out to her, she does an excited little dance and rolls on the ground for belly rubs. That usually attracts the rest of the children, and soon she’s at the center of a crowd, which is exactly where she wants to be.

Camp counselors Keeley Floyd and Russell Lyons take the opportunity to teach the kids about how to stay safe around dogs, since not every dog is as comfortable as Geneva is with kids surrounding her and touching her all at the same time. But once the kids get the green light that it is OK to pet Geneva as much as they want, they go for it. She’s overcome a lot to be rolling around in the sand and being petted by all those little hands.

On a recent morning, Geneva accompanied Keeley, Russ and seven children between the ages of six and 10 on their morning hike to the labyrinth (a maze-like circle of stones designed by Best Friends co-founder and artist Cyrus Mejia).

It was the first day at camp for most of the children and their first time seeing the labyrinth. But even though Geneva has done this before, she was just as thrilled as they were to be there. It took lots of hard work and love from Sanctuary staff, but today Keeley says, “Geneva is the embodiment of pure happiness.”

Find out more about the Best Friends Kids Camp.