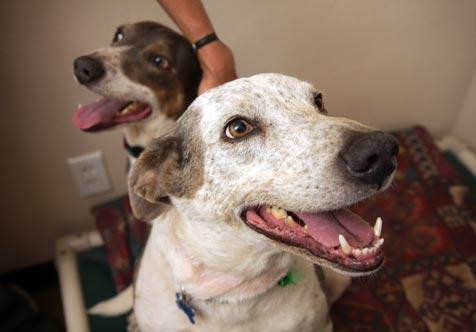 Dogs from the same litter reunited

Family reunions come in all shapes and sizes. Some are gigantic, week-long events with piñatas and photo album tables that extend to the horizon. Others are smaller, more intimate gatherings with a handful of close relatives catching up into the wee hours. No matter the size, however, one thing almost always seems to be present: the yummy food!

Two pups from the same litter

For Burrito and Manny, the food factor was only icing on the cake when they had a reunion after seven years apart. These two dogs were born at Best Friends. Their very pregnant mom came from Fredonia Humane Society in northern Arizona. Within days she delivered her pups, and in no time they were adopted to different homes. No big surprise, as cute as these guys were!

A Best Friends staffer named Wendy Burgoyne fell in love with, and adopted, one of the puppies. Her name is Burrito. Burrito got her name because her mom had left her out on the cold ground a bit too long one day. When caregivers found her mom was ignoring her, they wrapped her up like a burrito and tried to get her warm again. It worked! The name stuck, too.

Meanwhile, Manny, another of the pups, found his own home. He lived there for a long time, but then his person passed away. As with any animal Best Friends has ever taken in, he was welcomed back to the sanctuary as soon as things didn’t work out for him. When Wendy heard that Manny was back in town, she dropped everything to run over and say hello. What she found made her laugh, to say the least.

Even though he’s a bit bigger than his sister, Manny does some of the exact same quirky things that she does. Right on down to the wonky eye squint and tongue flip that Burrito is so fond of doing. Wendy knew they had to say hello again.

When they had their family reunion up at Best Friends, Burrito and Manny got along great, even though they didn’t seem to recognize each other right away. Seems that dogs aren’t always the best at keeping in touch with photos and blogs and such.

Still, it was a joyous occasion full of lots of tasty food! You can’t go wrong there. And until Manny finds a new home again, he’ll have somebody to share a birthday party with!

Photo of Manny (in foreground) and Burrito by Sarah Ause