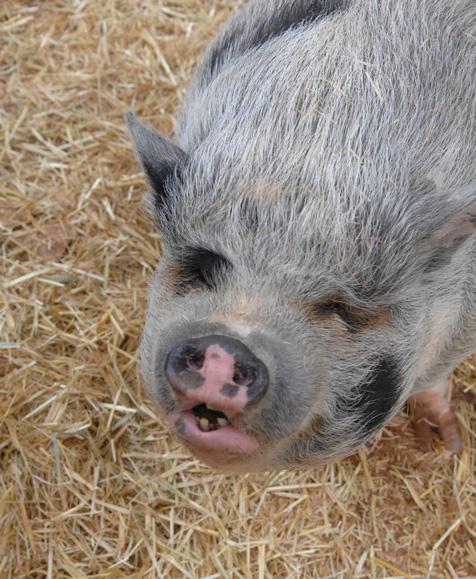 Double the celebration when two pigs are adopted

Romeo and Juliet had one important thing in common with many of the potbellied pigs at Best Friends: namely, a hefty roadblock from society to their happy ever after. As it happens, any number of pigs at Best Friends would have been adopted long ago by loving families if it weren’t for zoning laws that prohibit pigs (considered livestock by law) from living in many neighborhoods.

On the flip side, however, when a pig adoption does go through, it’s all the more reason to celebrate. And this time, two pigs from the Sanctuary happened to find two separate homes in the same month! Break out the confetti and sweet potato chews! The two lucky pigs, Nanuie and Hogan, each went to the ideal home for their personalities. 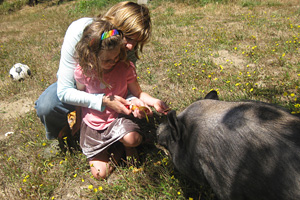 Hogan is great with kids.

For Hogan, his happy ending was a long time coming. This gentle soul of a pig, who came to Best Friends in 2006, has never had a real home. Life before Best Friends was not much of a picnic, either. He lived on a cramped acre and a half with about 500 other animals. Yikes! Authorities intervened and made sure the animals all left to better living situations. Hogan came to Best Friends with four other pigs.

In the beginning, he was understandably shy. After all, why should he have trusted people? He barely had any experience interacting with people, and they had certainly let him down before. Yet over the years, Hogan pulled a complete 180 in how he came to view human visitors. With all the kindness shown to him from caregivers, the medical team and visitors, Hogan learned to not only trust people, but love them. "He’s just a sweet, sweet soul," says Best Friends pig manager Yvonne McIntosh. Hogan learned to get along with people of all ages, as well as other animals.

When Holly Hester and family from Northern California saw Hogan in the Best Friends newsletter, they perked up right away. Holly had always loved pigs (her brother used to have some), and the Hester family had just moved to a six-acre property zoned for pigs. They had three children, ages 7, 5 and 2, and Hogan has many times over proved himself to be great with kids. "It seemed like a good combination," says Holly. "It just seemed like he was the guy."

The Hester family had another ace up their sleeve as well, and this is one that many people don’t realize can be such a struggle when finding a home for pigs. The family already had a vet who can handle working with potbellied pigs. Finding a suitable vet can be a real challenge! Not all vets can, or want to, work with pigs. When the Hester family applied to adopt Hogan, the pig staffers at Best Friends were thrilled.

Hogan has been having the time of his life in his new home, with a family all his own at last. "He’s a house pig," explains Holly. Living the best of both worlds, Hogan gets to explore the outdoor grounds during the day, and then he sleeps in the house at night. He even has a nice custom-built ramp he can use to access the front door. 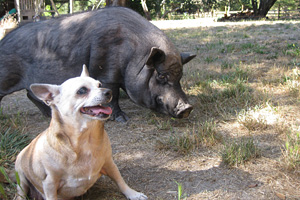 It's a whole new world for Hogan.

One of the children is soon getting her own bedroom. She’s determined that Hogan will have his own bed in there too, a bright, pink, fluffy one with his name on it! "This is a new world for him," adds Holly. A new world that he’s enjoying more and more every day.

The whole family couldn’t be happier now that he’s home safe and sound. The kids tell everybody all about Hogan, including on their trips to the grocery store when they’re buying him lettuce and other veggies. As for Hogan, he soaks up attention, especially belly rubs, at every turn. On that note, he gave his new family a laugh one day when Holly picked up his brush and Hogan immediately flopped to the floor for his brushing session. No time for subtlety, eh, Hogan?

As for Nanuie, she’s also been on the lookout for her own home for some time. She came to Best Friends in 2008 when a new landlord to her previous family decided she had to go. Despite her family’s protests and attempts to work something out, the landlord remained firm. Nanuie had to leave.

She’s always been a bit headstrong, or "sassy" as the pig caregivers like to describe her. When Erin Dwyer, also from Northern California, contacted Best Friends about the possibility of adopting Nanuie, Yvonne felt like she needed to explain Nanuie’s sassy behavior first. Erin’s response? "I love animals that are a bit sassy," she told Yvonne, "and I have a horse like that!" After hearing Erin’s response, Yvonne says the word "perfect" is how she’d describe the fit. Erin was cleared for adoption! 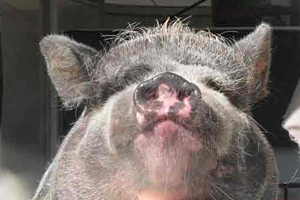 Nanuie prefers to be the only pig.

Back home, Erin says Nanuie’s independent nature is actually a benefit. Since she already has two of many different kinds of animals (dogs, cats, horses, donkeys, pygmy goats, etc.), Erin loved the fact that Nanuie preferred to live as an only pig. As much as Erin wanted to adopt a pig, she didn’t feel ready to add another full pair of animals to the family. Besides, as Nanuie will tell you, she’s enough pig to keep anybody busy! Nanuie has settled in wonderfully as the only pig on the grounds. "She’s great!" says Erin.

One of the things Erin has most enjoyed learning about pigs is how smart they are — and not just learning-tricks-fast kind of smart. "It’s a complicated smart," says Erin. "More like a human. It’s more emotional based." Erin describes that as much as she’s trying to figure out Nanuie, Nanuie is trying to figure her out right back. "It’s been fascinating getting to know that personality."

Nanuie has had a splendid time in her new digs. She’s another huge fan of belly rubs, like Hogan, and has had no shortage of people coming by willing to scratch her tummy. Here’s a quick tip: If you happen to live in an area zoned for pigs and end up adopting one, be prepared for a landslide of curious friends and family (even strangers!) who want to come over and meet the new member of the household. "Everyone’s been dying to come out and see her," says Erin. "They’ve loved her!"

Living up to her independent nature, Nanuie is taking her time deciding who she wants to get along with among the other animals. For now, the horses are not her thing. Yet she’s taken a liking to the pygmy goats. There’s a large pasture to explore on the property, but so far Nanuie prefers to spend her time closer to her own private area where she can observe. "Right now she’s just happy chillin’," says Erin.

In time, Nanuie will more likely than not decide to explore every square inch of the property, and probably try to claim as much as her own as possible! The key detail here, though, is that she has a home to check out. "She’ll have a good home for the rest of her life," insists Erin. Now there’s a happy ending worthy of any storybook.