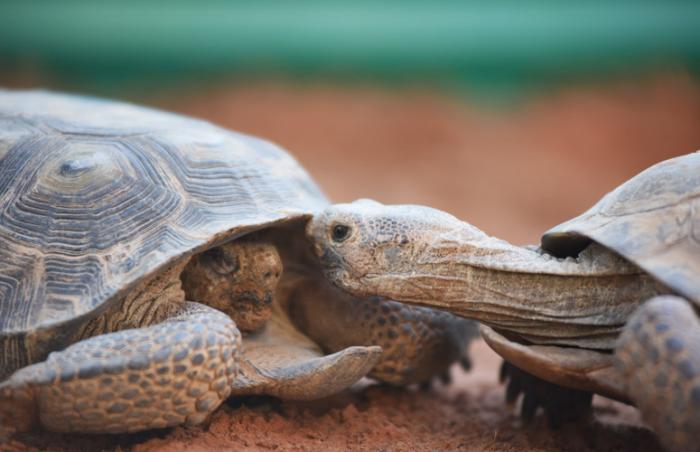 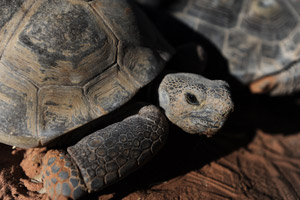 Gobi recently made everyone’s day really special when she decided to literally “come out of her shell" for a pet on her neck. This brave and social girl is one of 12 desert tortoises who recently began an exciting new chapter of their lives at the Sanctuary.

Gobi and her friends came to Wild Friends, Best Friends’ state and federally licensed wildlife education center, when a federally funded sanctuary in Las Vegas closed down because of government cutbacks. It was tough timing for Gobi and the other 11 tortoises; their lives were disrupted and they were displaced just as they were about to go into their three- to four-month hibernation or “brumation” period.

Thousands of tortoises from the closed sanctuary had to be rehomed or released back into the wild, where they are a protected species. But Gobi was in limbo, because she could neither be adopted out nor released. Due to some health problems, she needs long-term medical care and expert observation. So she and the 11 other special-needs tortoises came to Wild Friends, where they’ll live out their lives in a special habitat being built just for them.

The tortoises all suffer from chronic illnesses, such as upper respiratory infections and eye issues, and a few may even need surgery. But six of them will still have a chance to sleep away their winter in a climate-controlled room. The sleeping six were deemed healthy enough, and had enough calories stored up, to brumate safely.

Although Gobi and the other five will have to sacrifice their months-long nap, they’ll receive crucial post-operative care (several tortoises had bladder stones removed prior to their arrival at Wild Friends) and medical treatments. They’ll also have a head start on getting socialized and getting to know their caregivers. 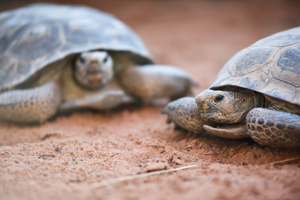 Though some are more shy than others, all the tortoises are used to people, since they were raised in captivity. And they are delightfully curious creatures — craning their long necks and blinking as they watch people walk around the room. One little girl was downright gregarious from the get-go, coming up to people within hours of arrival and letting them rub her neck and pet her toes while she made happy little tortoise noises in thanks.

Because Gobi is a bit more cautious and has been a bit slower to interact with people, her caregiver, Bobbie Foster, called it a “wonderfully surreal” moment when she walked up, tilted her head and extended her neck, as if to say, "Well, hello there!" Slowly, Bobbie lowered her hand toward the inquisitive tortoise. Bobbie says she felt “sheer joy” when Gobi placed her cheek against her extended fingers and let her stroke her face.