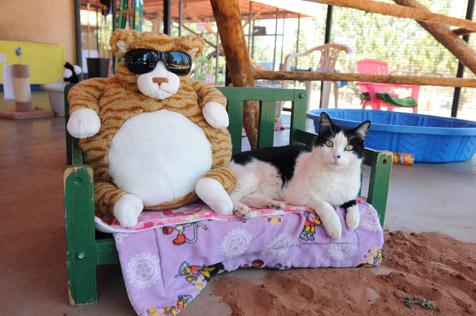 Kanab, Utah, home of the Best Friends Sanctuary, is a long way from the ocean. And yet, as far as the cats are concerned, that doesn’t mean they can’t hit the beach on a regular basis.

Caregivers have developed a new enrichment activity that has the cats literally running with excitement whenever it shows up. So, what’s the big breakthrough? Dumping sand all over the place. Yep, it’s that simple. "They have the best time," explains caregiver Heather Henley.

With a constant eye toward creating enrichment activities, caregivers at Cat World thought that some of the felines who are still too shy to go on walks might enjoy having the great outdoors brought to them. Caregivers spread a fine layer of sand on the concrete, too thin for the cats to be tempted to use as a litter box.

Little did they know what a huge hit the sand would be, and not only with the shy cats. This has become a universal high point for nearly every cat involved.

"They love it," Heather says. "They really like it when we spread it on the floor."

It’s not hard to notice their excitement. They roll in the stuff. They bat it around with their paws. They even dig through the sand searching for toys, which caregivers sometimes hide in buckets of sand.

Yuki especially loves digging for treasures in the buckets. He only has one front leg, but he knows how to use it when there are toys to be found.

And talk about low-cost entertainment. Sand surrounds every cat building at Best Friends. It’s a simple matter of collecting the new, and sweeping out the old. "They absolutely love it," says cat staffer Robin Jackson. "It’s therapy."

It also happens to be a fantastic training tool for some of the shy cats, the very cats who prompted this program in the first place. Consider Spock. He’s not yet ready to be touched or petted, certainly not ready for walks, yet when caregivers spread out the sand in his room, Spock comes running over within arm’s reach. That’s definite progress for him.

Sometimes a caregiver will even carry sneakiness to new heights by spreading the sand in a circle around themselves. The shy guys come even closer to their caregivers then.

Caregivers don’t put sand out every single day. That way, it doesn’t become so commonplace the cats lose interest. The strategy works. Every time the sand shows up, it’s like a birthday party all over again. "It’s been a great thing for them," Heather says. "It’s bringing the beach inside."

Most homes don’t have a concrete floor where sand for cats to play in can be dumped and then easily cleaned up. Here are some other enrichment ideas for felines.