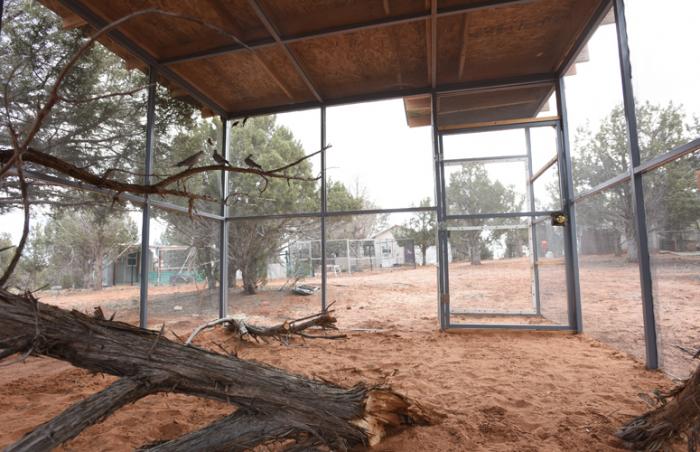 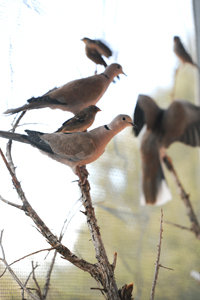 When the little collared dove arrived at Wild Friends, Best Friends’ state and federally licensed wildlife rehabilitation and education center, he was fighting for his life and in desperate need of help.

Doves like this one, and other wild birds such as songbirds, are prone to injury from flying into windows, falling out of nests during windstorms or ingesting lawn care chemicals. They also are in danger of being attacked by other animals or, in the case of migratory birds, can miss their migration and be left behind to fend for themselves in an inhospitable climate.

In any of these situations, the birds need some help getting back on their feet (or into the air) again. And now, a new flight aviary (basically a big flight cage) at Wild Friends, funded by a grant from a generous foundation, is designed to get birds ready to be released back into the wild once they’ve finished treatment and recovered from their injuries.

Much-needed therapy for a dove

Although he’d somehow survived an attack by another animal, when the dove arrived at Wild Friends, he was in critical condition. Best Friends wildlife rehabilitators got to work immediately in hopes of saving his life. They cleaned out his wounds and gave him medication to prevent infection and make him more comfortable.

Because the poor dove was still in shock, he received some much-needed heat therapy in an incubator, and spent some time in an oxygen chamber while he recovered from the initial trauma. Finally, he became stable and felt much better, but it would be nearly two months before he could fly free again. And with the new aviary open for patients like him, he had a great new place to get ready.

At 12 feet by 16 feet, the new aviary is the Sanctuary’s largest songbird flight enclosure for transitioning rehabilitated birds from captivity to release. Not only does it accommodate more birds, it also reduces the birds’ stress levels by giving them more personal space and freedom.

Most important of all, the new aviary gives the birds the chance to get back in shape. More space to fly means more cardiovascular conditioning, which goes a long way toward helping them stay in the air and out of harm’s way once they’re back in the wild. 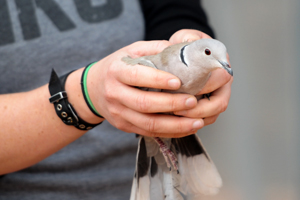 To help even more birds make the transition from rehabilitation to release, the Wild Friends staff will be outfitting the aviary with special feeding enclosures and a heated indoor spot to help birds stay comfortable as they adjust to outdoor temperatures. The heated area of the aviary will be separated into different-sized sections, so that birds can graduate up to larger enclosures, and then finally be released as their stamina increases.

Since the construction of the aviary, nearly 20 birds have been released, and the Wild Friends staff is gearing up for boom time. Every year, during the spring and summer months, rescuers bring in approximately 70 songbirds. And over the course of a year, Carmen Smith, Wild Friends manager, estimates that the aviary will help 90-100 rehabilitated birds fly free again.

Having a safe place to recover, regain strength and prepare for life on their own again makes a huge difference for birds like the collared dove. After a month and a half of intensive treatment, he was off the antibiotics and thriving in the new aviary. And once he got his wings back in shape and his day came, he rose straight up into the clear blue sky and flew away home.