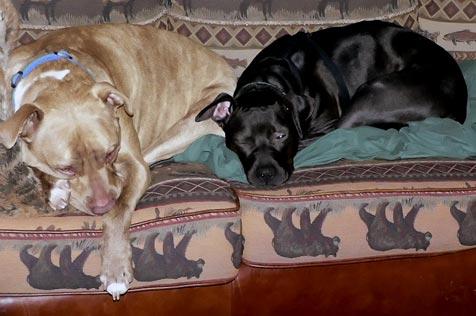 The first Vicktory dog, who was rescued from the NFL player Michael Vick's fighting ring, has gone home! How’s that for a statement worth shouting from the rooftops? This is one happy ending a long, long time in the making.

Woman falls in love with the Vicktory dogs

When Traci first heard about the Vicktory dogs, her heart went out to them. She couldn’t believe all they had been forced to live through. The one thing she knew for certain was that they deserved better. They deserved a home full of love and kindness. She wanted to be one of those homes. "If I could," she says, "I would have given every one of them a good home."

There was one setback, though. The Vicktory dogs were still a long way from looking for homes. First, they had quite the recovery ahead of them at the sanctuary. It would be a long wait to adopt one, with no guarantees, but Traci still wanted to be considered.

Then something happened. A big, goofy lovable pit bull named Tacoma came to Best Friends from a shelter. Tacoma is as friendly as a puppy. He even did a stint as office dog at the Best Friends clinic. Aside from knocking over all the furniture and thoroughly licking everybody who strayed close enough, he excelled as an office dog.

The adoption folks contacted Traci and told her about Tacoma. He, too, needed a home. Would she consider him? She took one look—and was hooked. Traci adopted Tacoma and they’ve been best pals ever since.

But she never stopped thinking about the Vicktory dogs. When the time came for several of the Vicktory dogs to get ready for homes, Traci still wanted to be considered. She and Tacoma felt it was time to welcome a friend.

It was a tough adoption process -- there a lot of special requirements for being able to adopt one of these special needs dogs. But after the adoption staffers approved Traci, she was thrilled! She had only one request: "Pick the dog you think will get along best with Tacoma."

Boy, did they knock this one out of the park. They chose Halle, a sweet, bashful girl who used to be afraid of her own shadow. When Halle first came to Best Friends, she was terrified of everything, everywhere. The whole world was one big threat. With all the help and constant TLC from her caregivers and friends, however, she’s come a long way and overcome so many fears. Even so, Halle still has confidence issues. Tacoma, on the other hand, is the kind of guy with enough confidence to bet the house on a pair of deuces in a poker game. This guy wouldn’t know how to act bashful on a dare.

When these two met, it was a cosmic case of love at first sight. They romped and played together and never had a moment’s trouble. In fact, they snuggled side by side on the bed with Traci during the initial sleepover. Talk about a deal-clincher! Traci and Tacoma took Halle home.

However, Traci can’t officially adopt Halle quite yet. The Vicktory dogs came to Best Friends with specific legal requirements, one of which is a six-month foster period before adoption. Still, if the first week of fostering is any indication, it looks like Halle has found her forever home.

She follows Tacoma around every minute and he’s equally smitten with her. They are inseparable in every sense of the word. Traci says that Halle is still a tad coy around new faces, but she doesn’t duck for cover or anything. Besides, every day she spends with Tacoma she absorbs a little of his confidence. And Traci couldn’t be more thrilled to have her around. "She has the sweetest, most innocent-looking face," she says about Halle.

So for now, it’s one big trial run. But with all the obstacles Halle has overcome so far, a six-month waiting period should be a cinch. Congrats to Halle, Tacoma, and Traci. It’s a happy-ever-after most certainly worth waiting for.

All of these miracles are made possible through your support! Thank you.

Photo of Halle and Tacoma courtesy of Traci