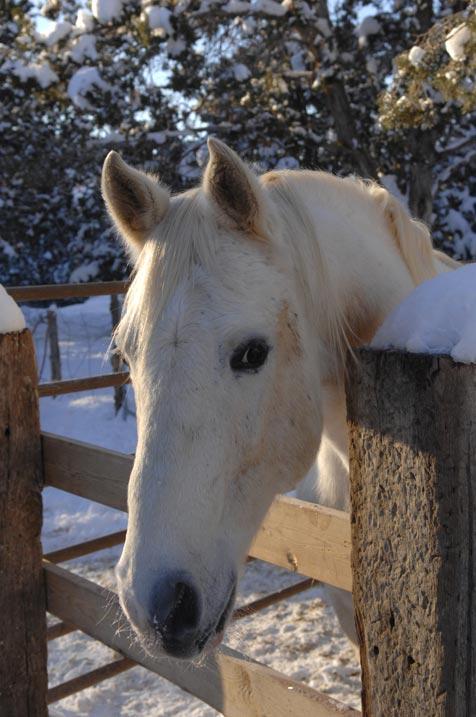 When Incitato the horse came to Best Friends two years ago as an intact stallion, the caregivers knew they were going to have their hands full, and then some. Not only was he a skittish fellow who spooked at the weirdest things (farm machinery, for one), but he would go into orbit every time he caught sight of a female horse.

Many months after his gelding (castration) operation, in fact, he still hadn’t calmed down where the ladies were concerned. Seemed like something was hard-wired into his system.

So his caregivers finally decided Incie had to be kept separate from anything with long eyelashes. This meant no female next-door neighbors. Incitato was living the bachelor life for good.

But then a funny thing happened. Because of routine pasture shuffling, Incitato found himself with an empty pasture next door. Meanwhile, the two mini-horses, Luna and Trixie, were looking for some extra exercise, so they took a day trip to the pasture adjoining Incitato’s. With caregivers standing close by, the two minis got to romp and play.

Here’s the funny part: In no time, Incitato and Trixie became best pals. They were leaning over the fence, chatting in horse speak, and having a grand ol’ time. But then, without warning, Luna charged Incie and gave him a hard nip right on the nose! "Back off! She’s my friend!"

What did Incie do? Mr. Unpredictable, Mr. Spooks-at-a-Falling-Leaf, Mr. Issues himself? Nothing. In fact, he just stared at Luna like she was out of her mind. But one thing was certain: He passed his first girl test. Soon after, the staffers decided to risk putting Incitato next to a female, a beauty named Beetlejuice.

And guess what? He has been every bit the gentleman. Almost ignores her, to be honest, which, if you know Incie, is unheard of. Way to go, Incie! "Normal" hasn’t been a word used to describe you so far, but it looks good on ya!

Explore Horse Haven at our Sanctuary