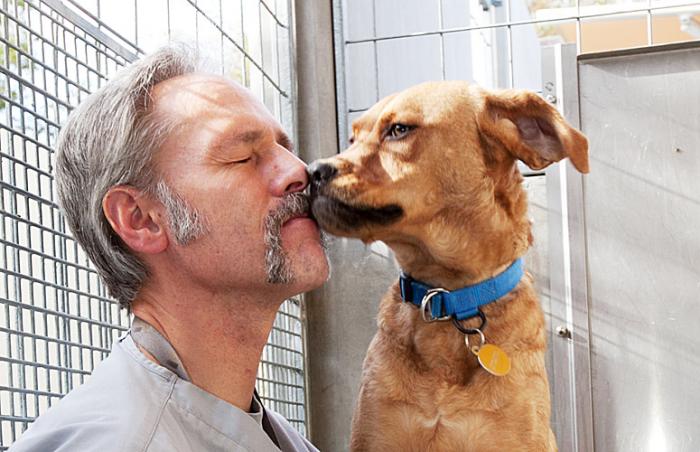 There’s nothing wrong with being shy. But as most shy people know, it can sometimes mean that you’re misunderstood. It can mean spending high school dances holding up the wall rather than holding your own on the dance floor. You might be the last one picked for teams in school. Introverted people can get along just fine in life, but often, the same doesn’t hold true for dogs in shelters. It’s one place where being timid and apprehensive can mean the difference between life and death.

Lauralea Oliver, animal assessment and transport specialist, is responsible for choosing dogs and cats from the six Los Angeles Animals Services shelters to come to the Best Friends Animal Society Pet Adoption and Spay/Neuter Center. Reserved dogs are often overlooked by adopters at the shelter when most other dogs are begging to go home with whoever walks by their cage. If they could, these outgoing dogs would be saying, “Pick me! Pick me!”

Meanwhile, Lauralea says, “Shy dogs hang back. And because they’re shy, they seem like they’re not friendly, and people think, ‘Oh he doesn’t like me.’ But a dog that doesn’t connect with people isn’t going to get adopted.” They’re the ones who need a little extra help. Luckily for them, Lauralea has a soft spot for canine wallflowers, so she gravitates towards them when picking dogs to bring to the adoption center. 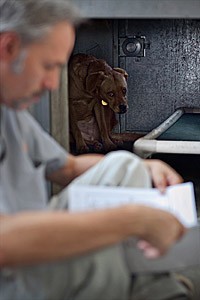 Shy dogs are often miscategorized as dogs who have been physically abused, but Lauralea says, “Nine times out of ten, these dogs aren’t victims of abuse; they’re victims of neglect.” It’s a key distinction because it means approaching those dogs in a certain way to help them learn to be “normal” dogs.

Lauralea says, “[Shy dogs] don’t know what it means to interact with someone. They’ve never seen a leash before. They don’t know what the inside of a house is like. You’re dealing with a dog that just doesn’t know what to do.” Learning these skills is essential for dogs to eventually find homes, but it’s too much to learn all at once, especially when the idea of just being near a person is overwhelming. It takes patience and a lot of hours to bring a dog from painfully timid to outgoing, which is why it became clear at the adoption center that a formal program and some volunteer recruitment was needed.

As it turns out, the task is perfect for human introverts because the program starts by spending time with the dogs without interacting. At all. In a world that tends to favor extroverts, this is one instance where quiet people who can get lost in a book are exactly what the trainer ordered.

Lauralea explains, “The first thing [volunteers] do is just go sit in the dog’s kennel and ignore the dog. And they do that for as long as they need to until the dog initiates interaction.” She has people go in and sit quietly in a dog’s kennel with a book, iPad — anything to take their attention away from the dog. She adds, “It’s really about giving the human something else to worry about and not to worry about the dog and just be present.”

The approach is designed to be low-pressure for dogs, not to force interaction but to allow them to make the decision when they’re ready to initiate contact. Dogs progress when they’re ready and at their own pace. New things like the leash and environments outside of the kennel are introduced one at a time. 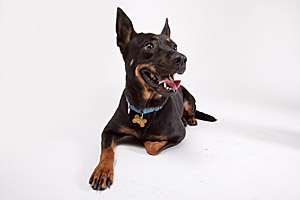 Gemma is one graduate of the program who started out terrified of everybody. Lauralea says, “She wouldn’t come out of her cubby. She was terrified of the leash.” When they tried, Gemma would “pancake,” meaning she’d flatten herself to the ground, too scared to do anything but make herself as small and still as possible. After volunteers put in hours of time, Gemma graduated from being afraid of the world to a superstar in the weekly obedience classes held at the adoption center. Lauralea says, “She learned her tricks and won every contest we had in class. Now when people come to her kennel, she runs to the front and anyone can walk her.”

As shy dogs continue to come to the adoption center, each one gets the same treatment at their own pace, until they too have a smile on their faces as big as Gemma’s. And it’s largely thanks to the volunteers prepared to sit quietly with these special dogs for as long as it takes. Those who, Lauralea says, “are willing to take the time and do something that feels like they’re not doing anything but they are. They’re actually doing more than they think they are.”

How you can help animals in need

Check out adoptable pets at the Best Friends Pet Adoption and Spay/Neuter Center in L.A.