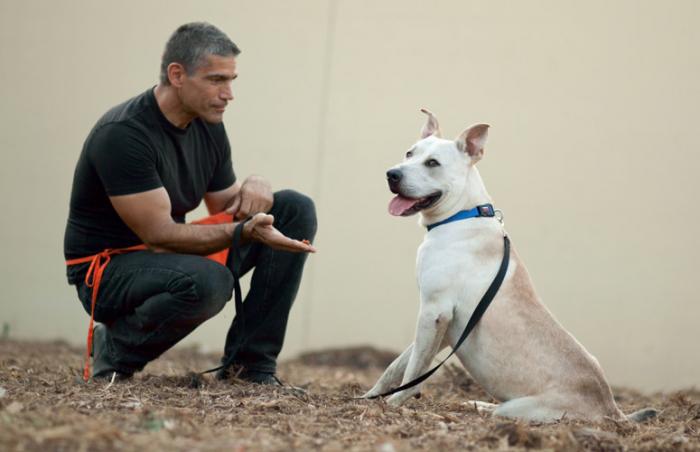 Ranger, a dog at the Best Friends Pet Adoption and Spay/Neuter Center in Los Angeles, was 70 pounds of high-energy, jumping, mouthing craziness in a furry white canine package. He was sympathetically described as "sweet, but with a lot of energy." Most potential adopters are looking for nice family pets, not giant Tasmanian devils, so dogs like Ranger can be hard to place because they're simply overwhelming. But that doesn't mean they can't be helped. Two classes help set up dogs and their volunteer handlers for success.

Training classes for humans and dogs

Lauralea Oliver, animal assessment/transport specialist, teaches the Big Dog Buddies class to prepare volunteers to safely and kindly handle dogs like Ranger. It's where people learn to properly fit collars and harnesses, how to enter and exit kennels so they're safe and dogs don't get loose, and what to do if dogs jump, mouth, pull or react to other dogs. That prepares them to handle most issues associated with large, rambunctious dogs. But it only addresses the human end of the leash. It's one thing to have a squad of well-trained people who can walk big, energetic dogs all day long without incident, but what about those dogs? You guessed it: There's a class for them, too. 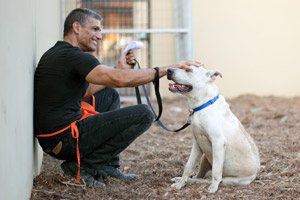 Dog Skills class is held once a week for five weeks, and is for - ahem - active dogs like Ranger. Once volunteers have been through Big Dog Buddies and have logged enough hours walking and handling dogs at the center, they can sign up to take an adoptable dog through Dog Skills class. That's how Ranger was paired up with volunteer John Ford, and how Ranger eventually found a home.

John says, "When I first met Ranger in class, he had a very, very short attention span and thought everything and everyone was a toy." Ranger was disruptive, unable to ignore other dogs in class. Lauralea matched them, she says, "because John is one of our awesome volunteers who's been in every dog class I've done at the center, and he's a tall guy so he could handle this big, crazy dog." But John certainly had his work cut out for him.

The class teaches volunteer handlers to help dogs through any bad habits, plus basic obedience and fun things like tricks and nose work. Lauralea says, "I want volunteers to understand reward-based training, to be able to do more with the dogs. If they want to teach the dog a trick, they know how. It gives them skills and a lot to do." The skills people learn in the classes help them to do more with every dog they encounter at the center.

John worked with Ranger on his own between classes and realized Ranger was an excellent student. Lauralea says, 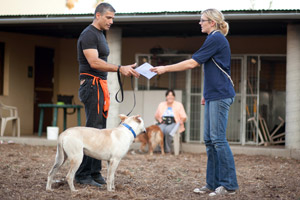 "Ranger wanted to work - he enjoyed it. John did an amazing job with him; he was so patient."

By all accounts, John had a different dog on graduation day. When it was their turn to show off their stuff, Ranger could sit, lie down, play dead, stay, wait at doorways and gates, and walk on a leash. He could handle himself around other dogs. John says, "The best part for me was witnessing Ranger's progress every time we worked together and then watching with pride at the last class when he graduated."

Soon after the class, Ranger got adopted into a great family and never came back. Lauralea says, "They love him; we've gotten updates that he's doing great, which is cool because they saw the dog came with all these great behaviors, and it's all because John did such a great job with him."

See pets available for adoption from, or learn more about volunteering at, the Best Friends Pet Adoption and Spay/Neuter Center in Los Angeles.