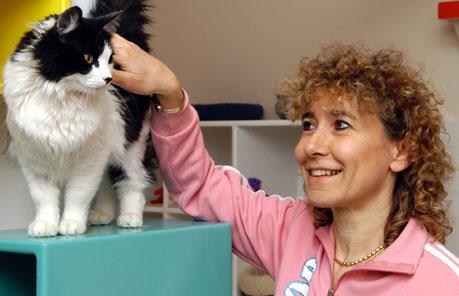 Improving the design of animal shelters in Italy

Will Best Friends get the chance to leave its paw print on Milan? Maybe! Laura Borromeo of Milan, Italy, came to the United States on a mission: to get ideas for the best designs for an animal shelter. And among the places she visited was Best Friends.

Laura was a behaviorist for Enpa Ente Nazionale Protezione Animali (Italian National Society for the Protection of Animals) for more than 20 years. She says that killing animals because they don’t find homes is against the law in Italy. Yet, because of that, she has seen a lot of cases where dogs and cats stayed in cages for so many years that they developed real emotional problems.

That’s why when Milan announced it was building a new animal shelter in the nearby village of Rho, Laura felt it was critical that it be designed with quality of life in mind. As a behaviorist, she knows the effects of keeping animals in a poorly thought-out environment for long periods of time. And the city valued her opinion enough to hire her as their design consultant!

So as part of her job, Laura has been taking tours of Italian rescues that do a good job providing healthy, comfortable, sociable long-term care for animals. And she’s also come to the United States to borrow ideas from places like the San Francisco SPCA and Best Friends.

She’s taking home blueprints of the animal areas, and loads of ideas from all the organizations she’s visited. When she gets back to Milan, we’ll be cheering her on as she presents her ideas for the healthiest, happiest animal shelter Italy has ever known!