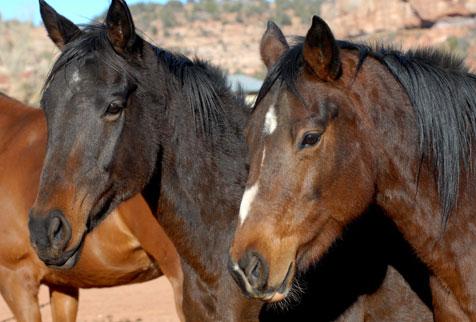 Last horse slaughterhouse in the US is shut down

As horses Anna and Lady socialize with their new pasture mates at Best Friends or take naps under the warm fall sun, they are blissfully unaware of their place in history and how they bore witness to the demise of the last horse slaughterhouse in the U.S.

Earlier this year, the two mares were literally in line to be butchered when a federal judge ordered Cavel International to cease operations at its facility near Chicago, pending review of an Illinois law that prohibits killing horses for human consumption.

Cavel, based in Belgium, had been slaughtering about 50,000 horses each year and shipping the meat to consumers in Europe and Asia, earning about $20 million in annual revenue.

Cavel challenged the law’s constitutionality, arguing that states may not enact legislation affecting foreign commerce because it interferes with the federal government’s exclusive authority over foreign relations.

A three-judge panel of the Seventh U.S. Circuit Court of Appeals rejected the argument. "The curtailment of foreign commerce by the [law] is slight and we are naturally reluctant to condemn a state law ... on grounds as slight as presented by Cavel," Judge Richard Posner wrote in his 15-page opinion for the court. He also noted that "states have a legitimate interest in prolonging the lives of animals that their population happens to like."

Anna and Lady, along with 28 others, were the first horses spared by the Illinois law. Unfortunately, horses who were still in trucks at Cavel that day were rerouted to slaughterhouses in Mexico and Canada.

The group of "Miracle Horses," as they are called, was whisked away to Wyoming under the auspices of the Humane Society of the U.S., then sent to various equine rescues. Anna and Lady were transferred to Best Friends, where at any particular time we care for 35 to 40 horses, mules and donkeys.

The pair spent two weeks in quarantine, where our staff determined that they were healthy, albeit shy – especially Anna.

Jen and trainers Ann Hepworth and Linda Alvey spent a lot of "non-demanding" time with them – not actively training, but just hanging out and letting the mares know staff could be trusted and are nice to be around. Our most experienced volunteers would go in and just sit in their pen, touching, scratching and brushing them if the horses allowed them to.

After a week or so, the trainers haltered Lady and started touching her all over her body and picking up her feet. Soon, she let Jen trim her feet.

Anna, because she was less socialized, took a little longer to start getting comfortable. Linda is doing most of her training because she spends so much time at Horse Haven. Anna has made progress and she recently allowed her front feet to be trimmed – a pretty big accomplishment.

"Horses aren’t safe to be around unless they feel safe with us, so that was our main goal with these two mares for a while. We wanted to convince them we aren’t going to hurt them," Ann says.

"As we get the relationship in place, we will communicate with them in a language based on the seven games that horses play with each other. When they are ready, we will saddle them, ride them and hopefully at some point adopt them to great homes. They are both very sweet mares and I don’t think it will take very long to get them past their issues."

Meanwhile, advocates have been pushing the federal government to take the next step in horse welfare. At a conference in July that Jen attended, representatives from HSUS, the Animal Welfare Institute, ASPCA and other groups agreed to work together to present a unified position on the American Horse Slaughter Prevention Act.

Although Cavel was the last of the three remaining U.S. slaughterhouses (two in Texas were closed early this year), thousands of horses are still being crowded into trucks, enduring hours without food, water and rest, and driven to Mexico and Canada, where they are slaughtered for human consumption overseas.

In addition to establishing a federal law against slaughtering horses for human consumption, the American Horse Slaughter Prevention Act would prohibit trading or transporting horseflesh and live horses for the same purpose.