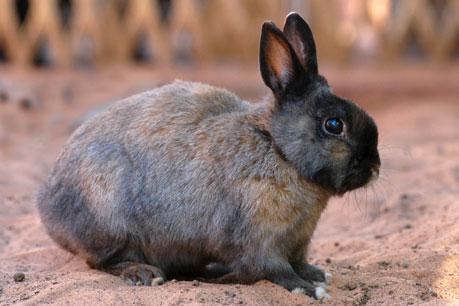 Tony the rabbit, one of the original founders of the Best Friends Bunny House, has died peacefully of old age at about eleven and a half. He was surrounded by friends, and will be laid to rest at the beautiful Angels Rest pet cemetery alongside his best friend, Tiger Lily, whom we know he’ll see at the Rainbow Bridge.

Rabbit with an ornery and feisty disposition

Tony, made famous by the Best Friends book, once lived in a bucket. What a frustrating life that was! It was too tall to hop out and too small to stretch his legs; children’s hands reaching down to him was a scary routine event that turned him into a nipper.

At Best Friends, he was an ornery little guy, glad to have his freedom, but still not too keen on human-folk. His feisty spirit set the tone for the Bunny House, which now gives sanctuary to more than a hundred hoppers, each as much an individual as Tony was. Caregivers spent time with Tony, often getting attacked, but still determined to break into his inner world. And gradually, he really did soften. By the time he was an old rabbit, he finally seemed at peace.

His best rabbit friend, Tiger Lily, passed away before he did. It wasn’t until she was gone that staff realized Tony had become absolutely and completely blind. His big, bouncy friend (who was much larger than he was) had apparently been guiding him around a bit. Once she crossed the Rainbow Bridge, Tony could no longer take a step without bumping into something.

Somehow, everyone suspected that he would follow her shortly to the Rainbow Bridge.Tony started doing something his caregivers called "practicing crossing over." He would zone out peacefully as though seeing what it would feel like to join his friend Tiger Lily on the other side. Then he would snap back out of it and say hi to everyone.

Just days before his passing, a visitor took Tony for a sleepover party. (A lovely and rare event! Bunnies don’t often get picked by visitors for the "Have an animal overnight while you visit the sanctuary" program. So he must have felt quite honored!) When she returned him, she said it was just a fabulous experience.

Shortly after, he died. All of his friends were there, holding him.

Tony, a true Best Friends legend, will be buried at Angels Rest, the scenic pet cemetery at Best Friends which is so peaceful and so full of breezy cheer that many folks like to visit there just to soak in the sacred atmosphere. He’ll be placed right alongside Tiger Lily.

The title of their headstone reads "Reunited Over the Bridge."