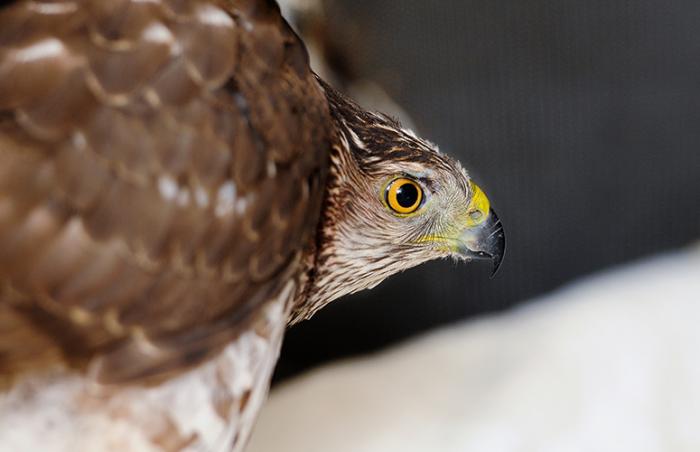 A lively Cooper’s hawk is rescued

For three days, a woman living near the Arizona/Utah border watched the Cooper’s hawk in her yard. He didn’t seem to be flying.

When she called Best Friends for help, Carmen Smith, Wild Friends manager and licensed wildlife rehabilitator, gave her step-by-step instructions on how to catch the hawk and transport him to the Sanctuary.

Carrying a towel in one hand, the kind rescuer managed to corner the hawk, pick him up by grasping his ankles so he couldn’t strike out with his talons, and get him securely into a cardboard pet carrier. She recruited two people to drive him out to the Sanctuary, where Carmen and Best Friends veterinary staff would determine what could be done to help him. When the bird arrived, Carmen identified him as a Cooper’s hawk that was at least a year old.

Sharp talons on a hawk

An exam showed no injuries or bruising. He was a little thin, which wasn’t surprising since he hadn’t eaten recently. A hawk in the wild cannot eat unless he can fly and catch his prey. Not only were there no injuries, but he was very lively, and was already doing his best to sink his sharp talons into Carmen’s helpful hands, and trying to leap out of the pet carrier.

The hawk spent that night at Wild Friends, the area of the Sanctuary where injured wildlife is rehabilitated. With the help of homeopathic remedies to lessen his fear and ameliorate possible head trauma, he settled down for a good night’s sleep.

Why couldn’t he fly?

An X-ray the next day revealed no injuries, and the hawk’s blood work came back normal. It looked more and more like he had probably had a collision with a window, which may have caused slight head trauma that could leave him temporarily unable to fly.

Sometimes hawks are so intent on pursuing their prey that they don’t watch where they’re going, and they can hit a window pane, as can songbirds.

Ready for a beautiful spring

Now that it’s been confirmed he has no broken bones, the Cooper’s hawk just needs time to recuperate, without having to hunt for his own food and worry about predators. He was kept in a quiet, warm enclosure at first, to minimize stress. Now he’s graduated to a six-foot, soft-sided enclosure in a building by himself so his body can continue to heal itself. The temperature in his enclosure will be lowered gradually until the outside temperature is reached to acclimate him for release.

Next, he’ll be put in an aviary to ensure he’s able to fly well enough to hunt for prey. Soon, he’ll be released to go off to clear skies again, just in time for a beautiful spring.

Clear decals help prevent birds of all species from flying into windows. They can be purchased online.

Find out more about Wild Friends at Best Friends