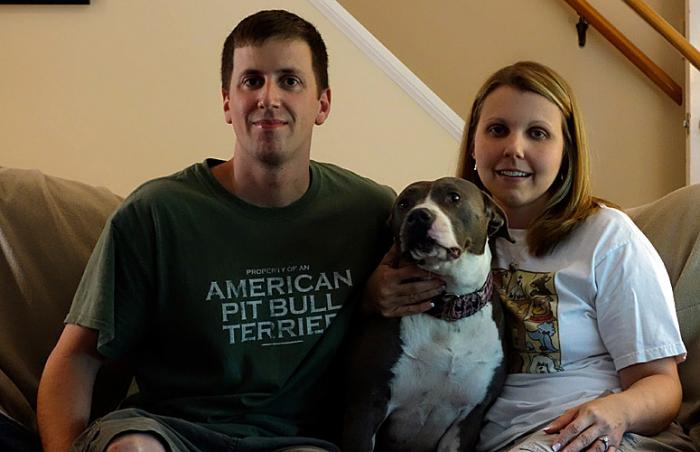 Those who believe in karma have faith that positive actions in life will come back to you in positive ways. The cycle is thought to occur after reincarnation; however, for Nicole Sansone, it happened much faster. She single-handedly earned $875 in sponsorship donations for a local rescue during last year's Strut Your Mutt event in New York City. In return, she found true love. 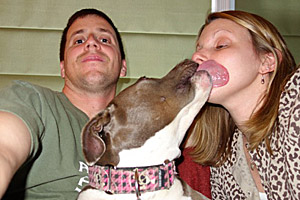 With lousy weather on the horizon, Nicole didn't even feel like attending the Best Friends-sponsored dog walk fundraiser, but she needed to deliver a check for a portion of the donations. Once there, she and her dog Giah were approached by a handsome young man. Funny thing, Jeremy Buturla wasn't going to come since his own newly adopted dog Boss was being treated for heartworms, but he had to drive a friend.

However, fate had other plans, and the two reluctant attendees struck up a conversation. They already had something in common: Both were dog-loving volunteers for Connecticut-based Bully Breed Rescue, a Best Friends No More Homeless Pets Network partner. And truth be told, "I was attracted to her dog … and her," says Jeremy.

Apparently Nicole's dog was attracted to Jeremy, too. Following the two-mile strut, Giah, the canine Cupid, promptly sat herself in Jeremy's lap. Nicole and Jeremy exchanged numbers, went on a date a week later, and the rest is history. In another two months, they were engaged. They married in April. 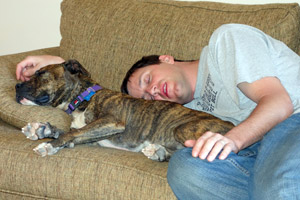 So where should newlyweds who met at Strut Your Mutt go on a honeymoon? Best Friends Animal Sanctuary, of course.

Nicole has volunteered at the Sanctuary annually for the last nine years and wanted to share this special experience with her new husband. "I feel great every time I'm there. It's like food for my soul," says Nicole, who also appreciated "seeing it from a first timer's eyes."

They worked at the Sanctuary by day and brought sleepover dogs back to the cottage every night. However, that presented a problem. There wasn't enough room in the bed for two people and a dog. So every other night, they switched who would get to sleep with the dog.

Their trip may not have been romantic, but it was the experience of a lifetime.

"The best thing I ever did was volunteer," says Jeremy who left the Sanctuary with tears in his eyes. "It was a great feeling being able to help, walk and socialize with the dogs, clean, and take a dog on a sleepover. I'd never experienced that before."

In fact, they loved it so much, they're planning to return to Best Friends next June for two weeks. However, the newlyweds managed to bring a little bit of the Sanctuary back with them. 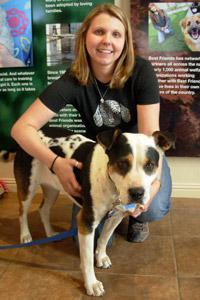 Toward the end of the trip, Jeremy brought up a suggestion - adopting another dog. As luck would have it, they found the perfect pup to join their pack, O'Sullivan.

Not surprisingly, O'Sullivan isn't the first dog to come back with Nicole from Best Friends. In 2007, Nicole hosted Moses for a sleepover and then brought him back a second night. "That was totally violating my 'don't take the same dog twice' rule," says Nicole. However, that third sleepover must have sealed the deal because not long after, she submitted her adoption application.

And Giah, the dog who helped bring Nicole and Jeremy together at Strut Your Mutt, was also adopted from Best Friends.

"I've done pretty good. I've only brought back three in nine trips," says Nicole. The couple now has a total of six dogs. Only two more to go, and they'll be starring in a real-life "Eight Is Enough" - canine style.

Who needs match.com when you have Strut Your Mutt? Sign up today and maybe you too will find your soul mate.