A family of two went on an unexpected journey recently when their entire home was picked up, loaded onto a truck and driven five hours away. No one realized the mother and baby barn owl were nesting between bales of hay bound for transport until the truck driver stopped and started unloading. That’s when he saw those feathery faces staring up at him. Concerned for his accidental avian passengers, the truck driver contacted Wild Friends (the state and federally licensed wildlife rehabilitation center at Best Friends Animal Sanctuary) to save the misplaced pair.

“It was one of those giant trucks with hay that was piled 20 feet high,” says Brianna Vlach, Wild Friends supervisor, who made the trip to pick up the owls. “So, we climbed on top, and the baby was wedged down in there.”

Since the baby was uncovered and alone, Brianna wondered if the mother had flown off; but the truck driver assured her that, no, mom was still in there. So Brianna, wearing her raptor gloves and safety goggles, extracted the fluffy owlet from the hay and got ready to put him into a carrier. And that’s when she heard Sierra Medlin, a Wild Friends manager accompanying her say, “Oh, there’s another baby.”

Only, it wasn’t a baby. The mother owl had been hidden underneath her chick, deeper into the hay. “(It was) just this heart-stopping moment of nothing between me and her,” says Brianna, who remembers freezing as she looked down at the distressed mother owl whose baby had just been plucked away from her.

Barn owls are no fun to handle on a normal day, much less when you’re getting between a mom and her baby, especially after such a long and tumultuous trip. But Brianna’s cool head and steady hands (aided by the way the owls were tucked between the bales) were successful in getting both owls out of the hay and into the carrier without adding more stress to an already tense situation.

Soon, they were all headed back to Best Friends Animal Sanctuary, the mama owl screeching the whole ride back. 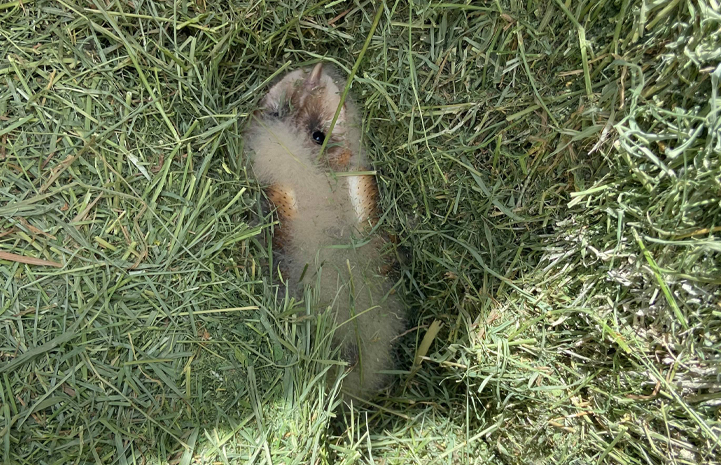 Helping a protective mother owl and her owlet

Once the owls were settled in at Wild Friends, the staff noticed that they weren’t doing very well because of dehydration from the long trip. And the mother, weighing even less than her owlet, was weak and unable to fly.

“With owls, the mother sits on the nest and the father brings food,” explains Wren Blossfeld, a licensed wildlife rehabilitator. “So, she was protecting the baby and she didn’t have access to any food. She also didn’t want to lose the nest because it was in a moving vehicle.”

Even after the two owls were given fluids and plenty of food, caregivers were still worried that the mom might not make it. But a few days later she made it abundantly clear that she had regained her strength (and was very protective of her baby) by flying straight at Wren as she tried to weigh the little owlet. Luckily, Wren was wearing a mask (meant to keep the owls from seeing a human face while interacting with them), so mama owl only caught plastic.

[Meet the owls, rabbits, ravens and other wildlife at Best Friends]

Caregiver Lauren Ross says the staff caught glimpses of the mom feeding the young owlet. “They were really cute while in rehab and the mom owl would sit on top. She was really good at protecting the baby.”

When they were a bit stronger, they put the birds outside in an enclosed area to let them fly a little bit and stretch their wings. The owls could be observed through an outside camera setup, the birds sitting together perfectly still, their detailed camouflage making them look exactly like a rock.

While the pair spent two weeks building up their strength, the little owlet’s feathers started filling in. That’s when Wild Friends got a call from the truck driver who’d found them. He wanted to help get the owls back to their home barn, where the father owl had been spotted flying around. It was time for a family reunion. 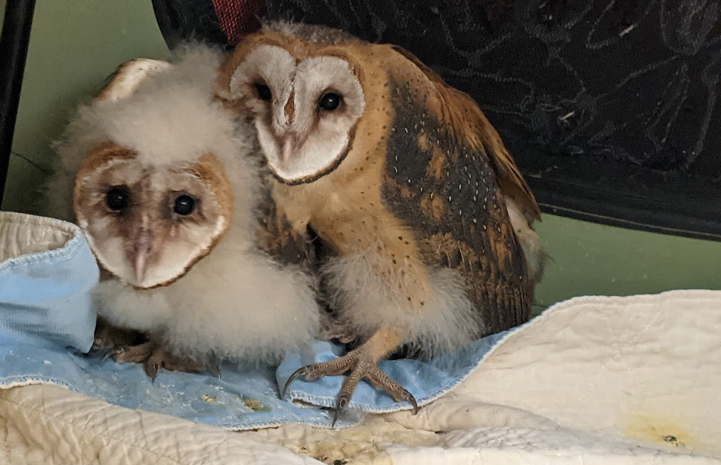 The owls, with Lauren along for the trip, traveled back home in the same truck that had taken them on their unscheduled road trip. Only this time, they got to enjoy the relative comfort of the cab.

The people who own the barn where the owl family lives were happy to open it up and welcome them back. They had missed the mother’s presence and had only seen the father flying around for those few weeks.

“When we got there, I put the baby in the hay first,” Lauren says. “When I brought the mom into the barn, the baby was climbing the hay bales to get to another hole, and she saw him and went in after him. They climbed to the top, and then they found a hole and popped in.”

The owls were back where they belonged, all in one place. And though Lauren didn’t get to see the father or their reunion, they’re sure to find each other. “They know the territory well,” says Wren. “That’s where she was from, so they should find each other pretty quick.”

The owls should also be safe from any future impromptu escapades. And the truck driver has certainly learned a lesson about checking hay bales for stowaways. “Half of our job is taking care of the wildlife, but the other half of our job is preventing bad human interactions with wildlife,” says Wren. “Our education program helps a lot.”

Safe and sound, the owls whose entire nest was hauled away on a truck are finally home ― none the worse for wear and with quite the story to tell around the nest. 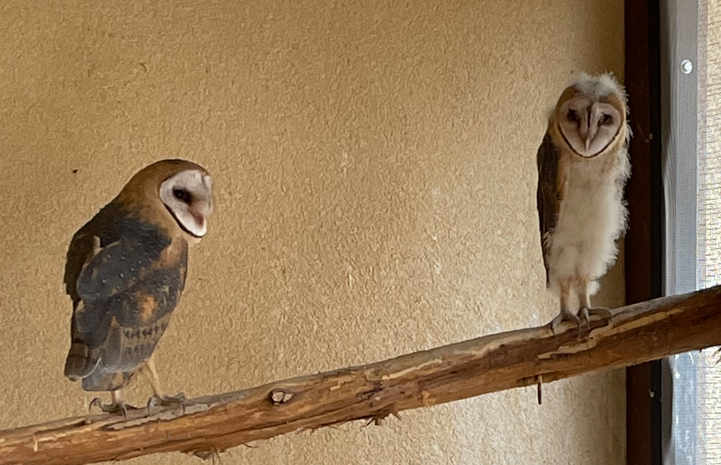 Wild animals in rehabilitation or pets looking for new families, they often need our help. By joining Best Friends, you can support them on their road home.