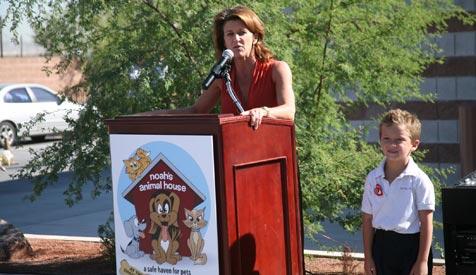 Two weeks after a one-of-a-kind Las Vegas shelter opened, the facility is doing exactly what it set out to do: provide a safe house for homeless and abused women’s companion pets.

"The women and children just light up when they come over here and see their pets," says Crystal McIntosh, manager of Noah’s Animal House, near downtown Las Vegas. "I’ve seen them lie down on the loveseat and read with their cats on their laps. It’s like a home environment."

Noah’s Animal House was the brainchild of Staci Columbo, a board member of the Shade Tree women’s shelter next door. According to shelter officials, the opening marks the first of its kind in the nation. Many safe houses for women across the country now have pet foster programs, Staci says, "but having a permanent structure on the same campus, we’re the first."

Best Friends periodically comes across cases where women are forced to give up their pets because where they live there is no such shelter available for their pets. A recent case was two hound mixes who were living in a domestic violence situation.

"The woman was leaving the situation and feared for the life of the dogs if she left them behind," says adoption coordinator Kristi Littrell. Both dogs, she says, were adopted to separate homes.

At the grand opening of the pet shelter, eight-year-old Noah Columbo smiled broadly as he cut the ribbon.

He had good reason to smile. The shelter was named after Noah, whose father passed away while Staci was still pregnant with their son. As a mother and animal guardian, Staci wanted to do something to help keep families whole by including their pets.

Until recently, when women and children arrived at Shade Tree, instead of turning them away, their pets were placed in temporary homes until the women were back on their feet.

The foster program developed into the idea for a permanent shelter on the Shade Tree grounds, where women could leave their pets within walking distance, knowing that they could get them back afterward. That dream became a reality on October 9 when the shelter opened its doors.

So far, it’s running exactly as planned. The women are responsible for picking up after their pets, keeping their kennels clean, walking their dogs, and spending time with them.

"Everybody’s really good about taking care of their responsibilities," Crystal says. "We don’t want to take over their duties. We try to make it more like a home instead of a kennel."

The first week it was open, three girls in their early teens took advantage of the visiting room. Crystal says they were at Noah’s every day, walking their dog and cleaning the kennel.

There’s a grooming facility so they can bathe them, cat condominiums for 12 cats, plus a room with 15 dog runs, each equipped with dog doors so the canines have access to outdoor runs. The shelter also includes a playground where children can play with their pets and take them for walks on the one-acre grounds. There’s also an isolation room for sick or contagious pets.

An added feature is two visiting rooms – or the "cuddle rooms" – which have living-room-like settings so the women and their children can relax and hang out with their pets in comfort.

Another bonus is that Noah’s provides spay and neutering through a local rescue group, which is free to the women, with the shelter absorbing the costs.

Also, security cameras are on the property and the doors to the pet shelter are locked 24 hours a day, with only the pet owners allowed in, because both Shade Tree and Noah’s are safe houses.

Read about Best Friends partner program with shelters and rescues.