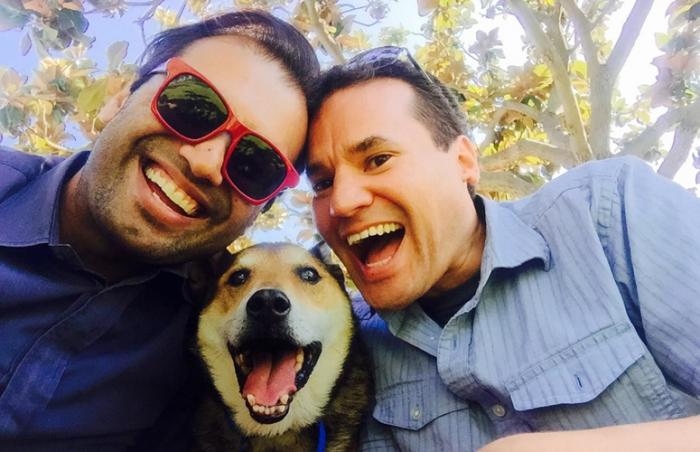 It was Alfie’s mournful howl that hooked his new people. Taking a break from running errands, Ankur Chakraborty and Jonathan Bell visited Best Friends’ NKLA Pet Adoption Center in Los Angeles, and they spent a few minutes petting Alfie. They had no intention of adopting a dog that day, but when they stood up to leave, Alfie began to howl.

“Something clicked in me then,” Ankur says. He and Jon made themselves leave the center to finish their errands — but then they came back and asked to spend some more time with the 12-year-old dog. That’s when they knew they would be taking Alfie home that day.

Alfie and his new family are part of the reason why we believe it’s entirely possible to reach our goal to make Los Angeles a no-kill city. Because in addition to the many young, healthy and friendly pets who end up in shelters, a good deal of adopters love older, special-needs and socially awkward pets just as much as we do. 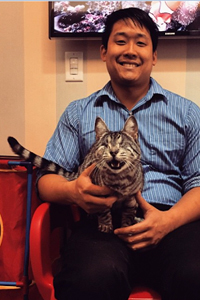 As we work toward no-kill communities, Best Friends focuses on basic math. We need fewer pets entering shelters and more pets leaving alive. Through hard work and targeted programs, the majority of pets who enter Los Angeles city shelters are being saved. But we’re not stopping at a simple majority; it’s not quite good enough for us.

Marc Peralta, executive director of Best Friends–Los Angeles, says, “Plenty of pets who come through shelters are quickly adopted. And as we get closer to no-kill, we need more of those folks who want to adopt animals who may otherwise be overlooked at first glance.” Animals like Alfie, for instance.

The things about Alfie that might make it hard to find him a home didn’t matter at all to Ankur and Jon. Instead of seeing an old dog with creaky joints, they felt a pull. “It was an intangible and indescribable bonding that happened right away,” Ankur says.

And the first thing Derek Wang noticed about Ricky Bobby, a silver tabby cat at the NKLA center, wasn’t that he didn’t have eyes. It was how well he moved around, despite being sightless. Derek didn’t adopt on the spot; he went home to sleep on it. But that night, he says, “I could imagine everyone else passing him up due to his blindness, so I knew I had to pick him up the next day.”

What some might call Ricky’s flaw was what found him a home. Now they’re best buddies. Derek explains, “I actually don't tell my friends about Ricky's condition before they meet him. I want everyone to just see him for who he is.”

Soul connection with dog who wants to be only animal 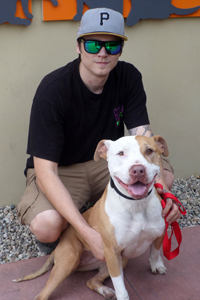 Thankfully, stories like these aren’t rare. Marcee has a similar tale to tell. When she came to the Best Friends Pet Adoption and Spay/Neuter Center (also in L.A.), it was clear that she didn’t want to live with any other animals, and realistically that narrowed the scope of potential homes for her.

So, caregivers spent weeks teaching the tan-and-white pit bull terrier how to respond to cues such as sit, down, settle, leave it, fetch, shake and roll over. By the time Daniel Carr arrived to look at dogs, Marcee was incredibly well trained. Daniel says, “She was so mellow and calm and well behaved that it was just an instinct, almost kind of a soul connection thing.”

The fact that Marcee dislikes other animals didn’t matter to Daniel. It’s a small thing compared to a soul connection and excellent training. Since he adopted Marcee, Daniel says, “She’s been bringing joy to everyone’s life. She’s an absolute angel.”

Some might believe it’s folly to save animals like these. And while it’s tempting to say these pets are especially lucky to have been adopted, in each case, adopters insist they’re the lucky ones.