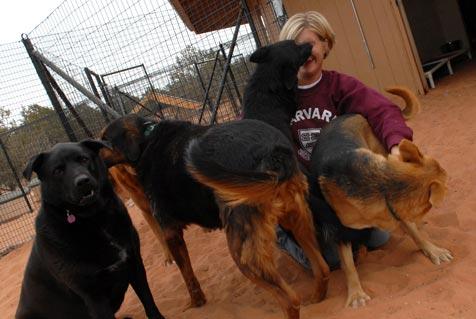 Pack leader dog and her pack

Any good monarch in the dog world knows that physical stature doesn’t matter. It's all about presence. And Gabbs, one of the new dogs at Best Friends, has that in spades. The four bigger male dogs living with her know darn good and well who's in charge! She was the pack leader.

Gabbs came to Best Friends with four other dogs from a scary situation. A rescuer from Nevada passed away, leaving 145 dogs behind. Here's the crazy part: This woman wanted all the dogs to be euthanized when she herself passed on. Um ... huh? But her plans weren't written down in a will-thank goodness-which allowed her family to decide they'd go ahead and ignore that final request. They started calling for help, and Best Friends jumped in with both feet.

The sanctuary couldn't take all 145 dogs at once. But the family, along with Best Friends and other groups, is working hard to find them homes. And there was room at the sanctuary for a small group of them who would do well together. Just enough dogs to fill up a single play area, which had opened up after some roommate shuffling. Again, the trick was that they had to get along well since they were going to be roommates.

Well, folks, you can't do better in the "getting along" department than this group. Put simply, Queen Gabbs speaks and the rest of the dogs listen. End of story. Never mind the fact that she’s about half their size. And they’re not afraid of her or anything. She’s in charge, sure enough, but they are all so close, like a tight-knit little family. There’s even a deaf dog in the group, Reno by name, whom the group accepts fully and lovingly, which is not always the case with deaf dogs. They groom each other, sleep together, eat out of the same bowls. It’s amazing to see how well they take care of one another.

And talk about friendly! These dogs know how to smother newcomers with attention. One is a bit shy and hangs in the background, but even he loves to nuzzle in for some pets and scratches once he knows who you are. Most of the time Gabbs lets the others hog the attention, but when it’s her time for the spotlight, she saunters over and takes her rightful place as Queen of the Universe. Royalty: Gotta love em!