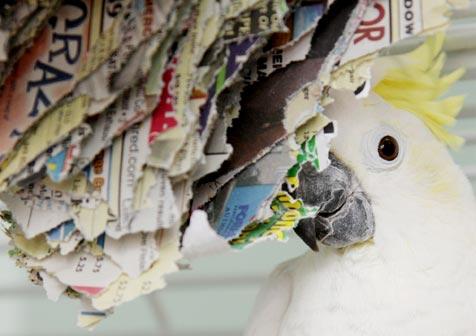 If your phone ever rings at two in the morning and a screechy voice on the other end of the line asks if your refrigerator is running, try not to let it bother you. More likely than not it’s just the parrots at Best Friends making the most of their new toys!

The parrots at the sanctuary are always trying to get their beaks on more phone books. They use the things as chew toys. Except, really, "chew toy" doesn’t quite describe it. For birds, phone books are more like a sculpture medium, such as a block of ice or a brick of clay. Yes, technically, they chew on them, but they chew them into works of art. You have to witness the many and varied masterpieces the birds sculpt out of a phone book to fully appreciate their talent. Only after hours and hours of shaping the mass—leaving a mountain of confetti in their wake—do the parrots consider the work done and move on to the next one.

The thing is, chew art requires constant replenishing, which is where phone-book donations come in. For years, the bird staffers have put out the word that they’re looking for old or leftover phone books. The supply has been right on par with demand … until recently.

Somehow or other, the planets must’ve aligned because in a single week, a huge surge in phone book donations swept into Best Friends’ Parrot Garden from multiple locations. Of course the birds are excited, but there are only so many they can chew through in a given month. So, the parrots came up with new and creative ways to use their recently acquired gifts. Crank calling, some are guessing, might easily be at the top of a very short list. Cut them some slack, though. They’ll cruise through this surplus soon enough. Let them have their fun!

Learn more about their lives by taking a tour of the Parrot Garden!