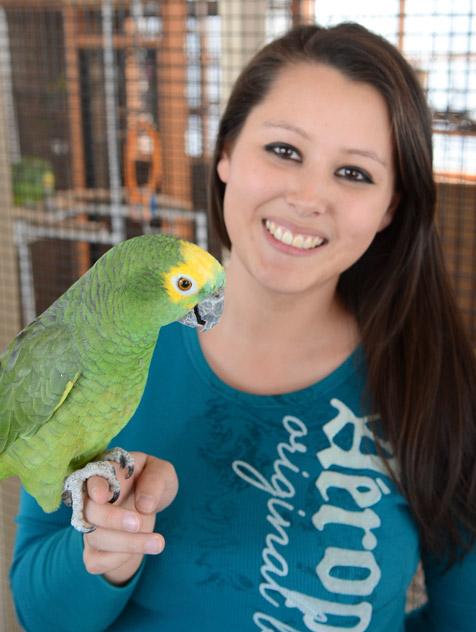 Kaila Huhtasaari of Pelkie, Michigan, made some rather special feathered friends at the Parrot Garden, the parrot section of the Sanctuary. No big surprise, considering she spent every day with them for five weeks. She also picked up something more than friendship during her stay: a better understanding of herself.

"My experience at Best Friends has completely changed my life and broadened my knowledge on animal care," Kaila says.

Kaila came to the Sanctuary as part of the Best Friends internship program, which is designed for people thinking about working in the field of animal welfare. She spent every day, weekends included, for five weeks working with parrots. "I can’t get enough of birds," Kaila says. 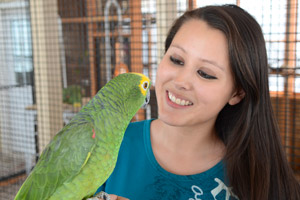 While at Best Friends, Kaila picked two fearful parrots to focus on for her internship. One was Romeo, a blue-fronted Amazon, and the other was Houdini, a Goffin’s cockatoo. Though she had success with both, her work with Houdini left a lasting impact on Kaila.

"Houdini, he was absolutely terrified at first," says Kaila. She began by talking and singing to him, even dancing for him, from a distance. Once he got used to her presence, she started caressing his face with a cockatoo feather. To Houdini, this was much less threatening than a human hand. Bit by bit, he learned to trust Kaila, even showing excitement when she visited. Ultimately, he got to where he’d dance on top of his cage as soon as she walked in the room. It was an incredible turnaround.

Looking back over her Best Friends internship

"The most valuable thing that I experienced was watching Houdini break out of his shell," Kaila explains. "The progress I experienced with him was life-changing for him, but also for me."

As it turns out, her life changed in more ways than one. Kaila ended up adopting a bird: Merlin, an Indian ringneck, who came to Best Friends after her person passed away. "I told myself and every one that I was not planning to adopt an animal," Kaila says. That all changed the moment she set eyes on Merlin. "My heart melted instantly," Kaila says.

Of course, Merlin (now named Gracie) made it easy. She started making kissing noises at Kaila the moment they met, as well as leaning in for affection. "I didn't choose her," Kaila says, "she chose me." Gracie has settled in wonderfully at home.

Her life purpose working with animals

Regarding Houdini and Romeo, Kaila is still rooting for her project birds. She even created a blog for each of them to help them find the right home.

In the end, Kaila’s five-week internship was a genuine turning point. "Not once have I ever known what my special talent was in life," Kaila explains. "For the first time, I finally realized my purpose in life and that's working with animals, especially parrots."

Learn more about internship opportunities at the Sanctuary.