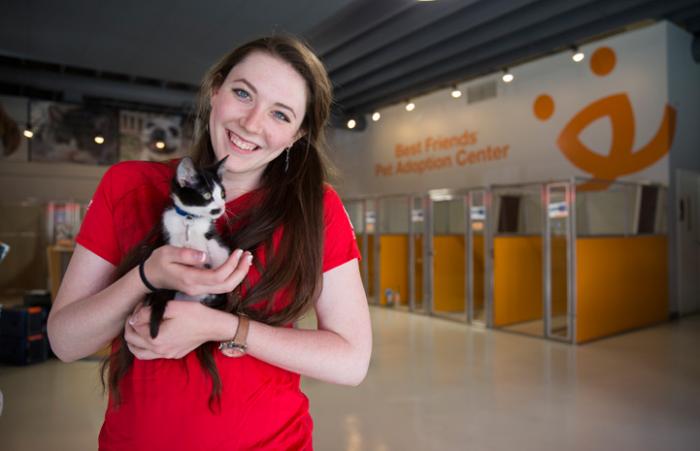 Little Legolas, affectionately known as Lego, was only a month old when he arrived at the Best Friends Kitten Nursery in Salt Lake City, Utah. Like the hundreds of other kittens the nursery will take in this year, he came from a busy local shelter that didn’t have the resources to help him. As a motherless kitten, he would need weeks of care before he would be big enough to be adopted.

Lego was special. He was born with cerebellar hypoplasia (CH), a neurological disorder that affects his motor skills. He’s a bit wobbly on his feet, which causes him to sometimes stumble or fall if he loses his balance. But caregivers and volunteers at the Best Friends Kitten Nursery understood Lego’s condition, and once he was big enough to be adopted, they helped him wobble his way into the perfect adopter’s home. 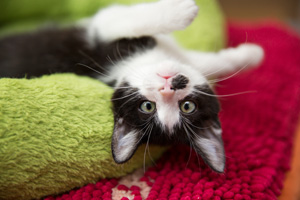 After a few weeks at the nursery, Lego was strong enough to move into a foster home to make way for other kittens who needed the nursery’s special intensive care. In his foster home, Lego was one of six kittens, and he had no idea he was different from any of them.

Lego’s foster mom, Robin Reddy, says, “He was determined to be part of the group. He slept in a pile with the other kittens, played with and chased them, and he loved things he could climb that would equal the playing field. He was a great climber and the first of the group to breach the pet fence.”

CH aside, Lego is a healthy little guy whose condition won’t affect the quality or length of his life. All he needed was to find a home with someone who understands that, and who loves him for who he is. Little did Lego know that he was about to find all of that and more.

Just the right home for special kitten with CH

Although Sarah Mohalley wasn’t actively looking to adopt a new kitten, when she learned about Lego on the Best Friends website, her heart melted. Immediately smitten, she felt she needed to meet the little black-and-white ball of fluff. That’s all it took for him to win her heart. “I was sold the second he wobbled toward me in the playroom at Best Friends,” she says. And it turned out she was uniquely qualified to take him in.

Sarah is not only a huge cat lover, but also a graduate student of speech pathology at the University of Utah. To her, adopting a CH kitten seemed only natural.

“Quite a few things we treat in our field are the result of neurological conditions,” she says. 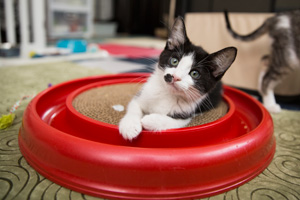 Taking home a kitten with CH requires a little bit of preparation. The first order of business was for Sarah to make sure her home was safe and accommodating for her new family member. This included setting up a system of cat trees to help Lego climb up on the bed.

A big fan of “Lord of the Rings,” Sarah says she named him Legolas (one of the characters in the Tolkien trilogy) because “Even though he's a little clumsy on the outside, I think that on the inside he's as graceful as an elf.”

The new name suits him, as does his new life, and he has settled in happily. Lego might be unsteady on his feet, but the time he spent at the Best Friends Kitten Nursery and in his foster home is helping him grow up strong.

Since going home with Sarah, he’s become her constant companion and a source of inspiration. He’s even helping her with grad school. “He makes every late night of studying enjoyable, and every early morning (it’s a) a joy to get out of bed,” she says.