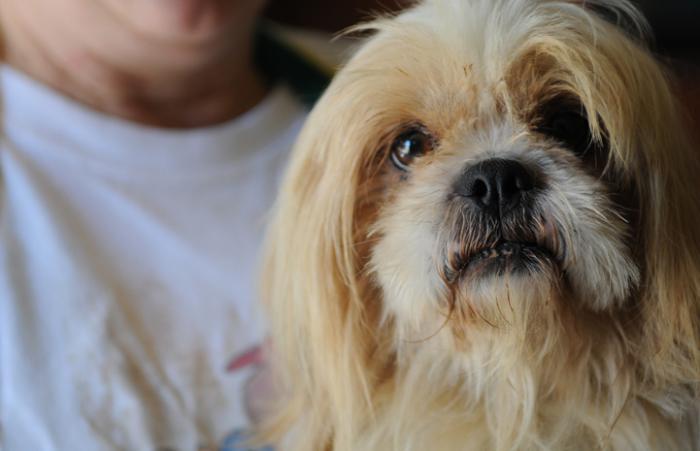 Personal story of caring for a puppy mill rescue dog

I could hear the skepticism in the rescue organization representative’s voice. I was 22, newly graduated from college, just moved into my own apartment, and applying to adopt a rescued dog. “We’re getting some dogs from a puppy mill bust next week,” she told me. “Do some online research and let me know if you want to take one of them on.” As she hung up, I knew she fully expected to never hear from me again. But I did my research. And, although the pictures and descriptions shocked and horrified me, I wanted to adopt the dog even more.

Those photos – commercial breeding facilities featuring rows and rows of filthy, stacked cages crammed with miserable and sick-looking dogs – haunted me. When I went to meet the transport several weeks later, I met a terrified and shell-shocked dog who cowered in the back of his crate and howled the whole ride home. Like most breeding dogs, confined in the facility to produce litter after litter, my new companion, Simon, had no concept of life outside the mill. He was seven years old and getting his first glimpse of the world.

Caring for a puppy mill rescue dog is an exercise in patience, compassion, and fear management. Dr. Frank McMillan, director of well-being studies for Best Friends, compiled information from a series of scientific studies undertaken by Best Friends, in collaboration with the University of Pennsylvania School of Veterinary Medicine. The studies found that fear is the biggest issue these dogs have – the main thing that holds them back from a completely normal life once they leave the mill. They can be afraid of literally anything, but the most common phobias are of strangers; “general life events,” such as movements, noises, and common household objects; and other dogs.

Simon the rescued puppy mill dog seemed more baffled than scared. He was slow to adjust to being inside a house – walking on rugs and a linoleum floor, navigating around furniture, and figuring out that the microwave wasn’t a monster. For the first two weeks, we spent many hours walking around outside, but he would never relieve himself anywhere but in the house. House-training a puppy mill dog is a unique challenge, because they are used to going right where they are, whenever they feel the urge. They don’t understand the concept of holding it.

Helping a puppy mill dog succeed in a home

There are no quick fixes for any of these problems. They can be frustrating to deal with and can take many months or years to fully resolve – if they ever do. The good news, says Dogtown manager Christine Vergallito, is that if an adopter has the right expectations, a puppy mill rescue dog can do really well. Dogtown manager Michelle Weaver adds that Best Friends has a lot of success placing these dogs, since caregivers and trainers work intensely with them while they are at the Sanctuary, and help to prepare adopters for the challenges ahead.

I didn’t have that kind of help when I adopted Simon. But I didn’t really have any expectations of him either. So I wasn’t disappointed that he soiled the entire area inside his exercise pen every day; that he didn’t like to be picked up, held or cuddled; or that he exhibited more indifference than affection toward me in the beginning.

I didn’t know it at the time, but, in being patient and consistent with him (bringing him outside for potty breaks no matter how many times he went in the house, not forcing any physical contact on him, and instead allowing him to come to me when he was ready), I was doing the right thing for him.

Living with a rescued mill dog

Still, Simon never turned into a “normal” dog. He never learned to play with toys, maintained a startling indifference to other dogs for the rest of his life, and was never fully house-trained. Before he became incontinent due to old age, he would go outside about 80 percent of the time. This isn’t uncommon for mill dogs, and I dealt with it as best I could – with a fully stocked cabinet of cleaning supplies.

In retrospect, I think I did pretty well with Simon. There’s just one thing I would do differently: I would get another dog as a companion and a role model for him. The Best Friends studies done with the University of Pennsylvania found that having another dog around was the single most helpful thing in a puppy mill dog’s recovery. There are several reasons for this, including the fact that another dog can act as a social buffer, and help reduce the intensity of the emotional reaction to something frightening or stressful. At the Sanctuary, puppy mill rescue dogs are treated just like any other unsocialized dogs, and often paired up with more social dogs. 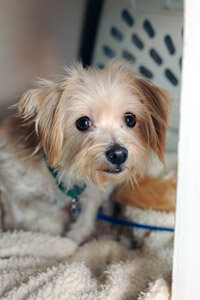 An experience eclipsed by no other

Though I may have shortchanged Simon in that area, forming a bond with the little dachshund was one of the most rewarding experiences of my life. And I’m not alone. Dr. Frank notes that in a survey of nearly 800 people who had adopted puppy mill dogs, 91 percent said they were “extremely satisfied” with their adoption experience, and 95 percent would do it again, despite all the challenges and frustrations.

Adopting a puppy mill rescue dog isn’t for everyone. But for those who choose to open their hearts and home to one of these special dogs, it is an experience eclipsed by no other.

Best Friends is working to stop puppy mills. Learn more about the issue and what you can do.