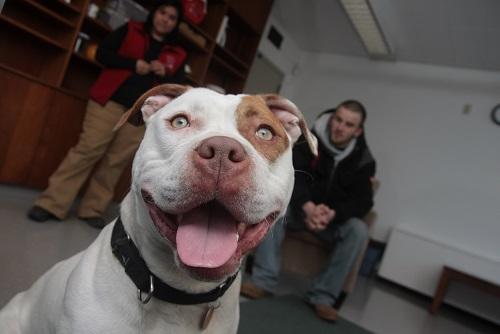 A stocky boy's shaved head bends over a brindle and white pit bull. He murmurs to the dog, and they immerse themselves in a conversation that is theirs alone. It's obvious the pair share a strong bond as talk morphs into playful roughhousing. The "boy" is hardly a boy anymore – at 18, Josh is turning into a young adult, though unlike most kids his age, he's not hanging out with his buddies or wondering who he should ask to the prom. Josh spends long days and fitful nights in a halfway house for youth offenders. There is a high turnover here and not much time to form friendships. Everyone is labeled with a bad reputation.

Maybe that's why he gets along so well with the pit bull, Nugget. They are both misunderstood breeds, poorly portrayed by the media as being inherently bad. The duo was introduced through Project PITS, a program in Tennessee designed for boys like Josh and pit bulls like Nugget.

Project PITS (Partners in Teaching Skills) was created by Jodi Preis, Terry Hrasok and Lisa Constable to pair up rescued pit bulls with youth offenders who obedience train and help prepare the dogs for adoption as family pets. It is also the women's hope that the boys and dogs will develop a loving bond to benefit them emotionally.

All of the dogs in the program are rescues from Jodi's Tennessee shelter, Bless the Bullys, which is a safe haven and foster home for American pit bulls and American Staffordshire terriers in need.

"Don't believe the hype," Jodi tells visitors to her web site. "Pit bulls and AmStaffs are among the most loyal, loving and affectionate dogs you will ever meet. Their exuberance and zest for life, not to mention their goofy personalities, make them irreplaceable."

The six-week program was launched in March and before long enthusiastic boys were counting the hours until Wednesdays. That was the day that Jodi and Lisa brought their new four-legged friends. Even in freezing weather all of the halfway house residents would bundle up and head outside for training.

"It is so incredible to watch the boys with the dogs," enthused Jodi. "I know there are reasons they are incarcerated, but they are still kids, and that has to be such an un-stimulating environment for them. I am so hoping this has a positive effect on them."

A few weeks later Jodi was singing praises for Charles and Falcon, a boy/pit bull pair who "graduated" from the program. The two bonded instantly and through working with Falcon, Charles came out of his shell and took to the responsibilities of training. He kept copious notes each session, recording what worked and what didn't and how Falcon responded to certain words. This will all be part of a package that accompanies Falcon to his new adopted home.

"It was truly amazing to watch Charles work with Falcon. He really came to life, as did the other boys just by watching them," said Jodi. "I see a huge difference in Falcon and also in Charles. I'm hopeful that our success will spark the start of other similar programs designed for pit bulls. These dogs are so people oriented, they were just meant to do things of this nature!"

Project PITS is just one of several programs Jodi, Terry and Lisa would eventually like to develop under the name Operation Turn Around. Terry is the director of the local county animal shelter and is looking forward to starting a prison dog program. Lisa works with horses and hopes to create a program to take advantage of their gentle and personable nature.

These projects might be a year or two away, but Jodi and her "bullys" will continue visit the halfway house. In time, more and more boys like Josh and Charles will graduate from Project PITS and get to prove that not only troubled youth, but also pit bulls, should be given a second chance.

Get more information about Bless the Bullys and Project PITS.