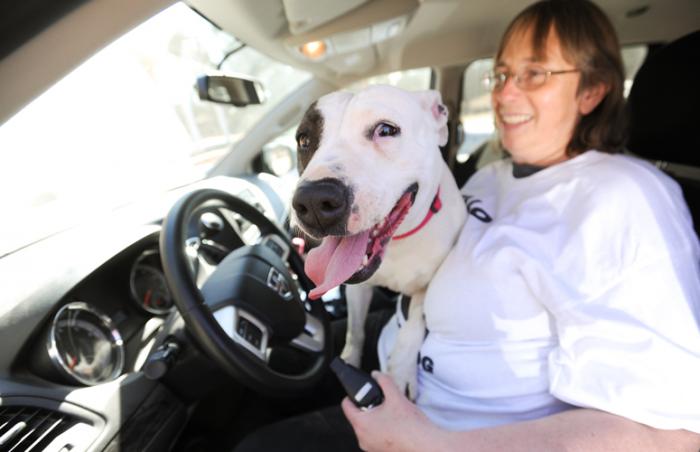 When an unanticipated detour during a trip to Zion National Park resulted in a tour of Best Friends, Caroline Lynch realized she had discovered something special. Though it took years, she finally returned last January to volunteer. After that, her connection to the Sanctuary blossomed and she visited an amazing 10 times — all in one year.

Most of the time, Caroline traveled to the Sanctuary with her father, Herbert Lynch. Because of health limitations, he would stay at their hotel while Caroline volunteered on-site. But Herbert adored the dogs his daughter brought back to the hotel for outings and sleepovers. One of their favorites was Betty.

The high-energy American Staffordshire terrier is young and enthusiastic, but almost innately, she understood Herbert’s physical limitations and never jumped up on him. So whenever they could, Caroline and Herbert loved to host her on sleepovers. Betty always made a wonderful bedtime companion.

“When you fall asleep at night she falls asleep with you, but she would come over in the middle of the night as if to check on you,” says Caroline. “She’d look over at you, give you a kiss, and go lie down.”

Then the next morning, when it was time to return to Dogtown, Betty would always head over to Herbert’s bed and give him a farewell kiss before leaving.

Father and daughter were scheduled to return to the Sanctuary this February when, unexpectedly, Herbert passed away a week before their trip. Rather than cancel, Caroline still made the trip in honor of her dad, taking the opportunity to do many of the things they loved to do together, which included outings and sleepovers with their favorite dogs. 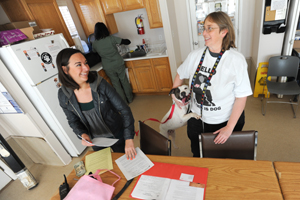 One particular outing with Betty stood out — a visit to Angels Rest, the final resting place for Sanctuary animals and beloved pets. Visiting such a place of remembrance and love generated some intense emotions about her recently departed dad. However, Betty managed to bring some levity to the occasion.

When Betty encountered a metal statue of a dog, she reacted as though it was a real dog — advancing carefully and even sniffing the make-believe dog’s behind. And though she sometimes is anxious around new dogs, Betty was a model citizen meeting her new “friend,” and Caroline could not have been more proud of her.

Sense of peace at the Sanctuary

Even without her dad, Caroline plans many return trips to volunteer at Best Friends. Not only is helping the animals gratifying for her, but she also experiences a sense of peace that she only finds at the Sanctuary.

Carol says that the beautiful scenery, combined with the disconnect from the responsibilities back home and the camaraderie with others passionate about animals, cause the stresses of life to fall from her shoulders each time she visits. That peace has helped her through the loss of her father. Even her co-workers have commented on her newfound serenity since she started visiting the Sanctuary.

Caroline feels that Best Friends is more than just a sanctuary for animals. She says, “It is also my sanctuary away from everyday life and work."

Recently, Caroline returned home with even more than the usual sense of peace she takes with her from Sanctuary visits. After more than a year of loving Betty mostly from afar, Caroline finally sealed the deal and adopted her.

Volunteer with animals at Best Friends