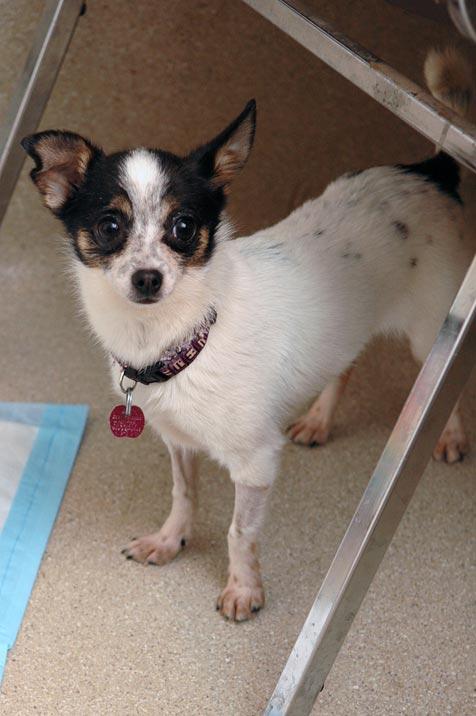 Puppy mill survivor now has hope in her eyes

When Conra Weber of Salt Lake City, Utah, looked into the eyes of a little dog named Hollywood for the first time, she knew she was going to adopt her. She saw a sweet, vulnerable, intelligent dog looking for stability. And once you know Hollywood's background, you can tell that Conra's first impression was right on the money.

Hollywood came from a puppy mill. In fact, she's one of the 10 Nebraska puppy-mill dogs who came to Best Friends. Now, puppy mill dogs can be a bit different. For starters, they have no good reason whatsoever to trust people. And normal, everyday things like going on a walk or riding in a car can seem as foreign to them as picnicking on Jupiter.

Yet, those eyes. Conra knew that even though it'd be a challenge, Hollywood needed her. She brought her home. Hollywood had already made progress during her time at Best Friends. All the staff gave these puppy mill dogs heaps of attention and affection, but Hollywood would still try to run away at every opportunity. Especially in the beginning. Luckily for Hollywood, though, she had a role model to help her. A Chihuahua named Leah.

Leah came into this world with her bones on backward. At least in her legs: The tibia and fibula were reversed. It took an operation, lots of metal pins, and loads of time to get Leah walking again. Even now, she still has her own little unique strut. Conra describes her as fragile physically, but emotionally strong. The perfect complement to Hollywood, a dog who is physically strong but emotionally weak. Hollywood and Leah bonded quickly. And as she watched Leah playing and kissing the humans, Hollywood took notice.

In the month or so since she's been home, she's made amazing strides. One outing proves it all. At a big family get-together recently, Hollywood mixed and mingled with strangers of all shapes and sizes. She let kids pet her, she let grownups pet her, she even napped in Conra's lap during an evening game of cards. A month ago, that would have been impossible.

Hollywood has let go of most of her fear and anxiety. She still doesn't seek out love, though. At least not that Conra can see. Dogs with her background sometimes make slow and hard-to-notice progress. Sometimes it's three steps forward and one step back, but Hollywood is truly finding her way. And that look in her eyes? "Those little eyes don't look so lost and empty anymore," Conra says. Now all it will take is time.

Find out what you can do to stop puppy mills.