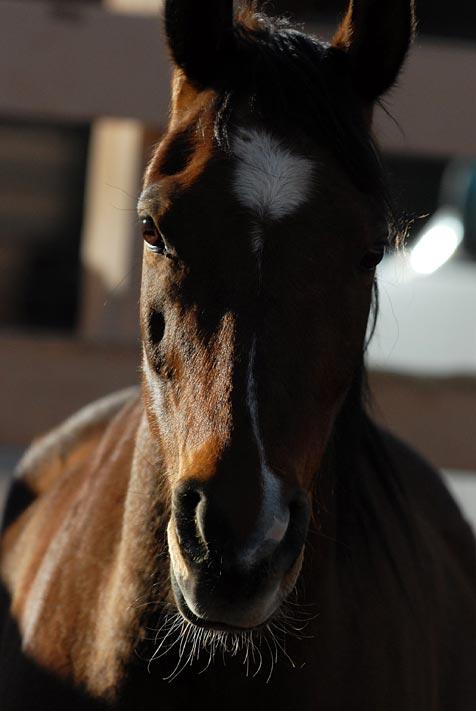 If a horse lives his entire life around only one other horse, and that horse happens to be his mother, and that mother happens to be the sweetest, most easygoing critter ever to walk on four legs, he can perhaps be excused for forming a somewhat rosy version of the world. Amir the Arabian is having a bit of culture shock these days. No worries, though, it’ll be good for him!

Amir had lived with a family in southern Utah for the first 15 years of his life. He had a good home there and his people loved him as best they could. He also had a wonderful companion in his mom, but she passed away a year ago.

Since then, he’s become a little restless. Arabian horses are somewhat prone to restless behavior anyway. They have a mental makeup similar to Jack Russell terriers’, explains Best Friends horse manager Jen Reid. "They have all this energy they want to put to use. If you don’t give them a productive outlet, they’ll make one."

Is it any wonder, then, if an Arabian gets plunked into a pasture and left to his own devices; he might invent a little mischief? Nope. No surprise at all. At Best Friends, Amir can’t yet grasp the concept that he doesn’t get to do whatever he wants anymore.

But he’s catching on. The trainers have been playing training games with Amir and it’s been quite the eye-opening experience for him. For the first time in a long time, Amir has the chance to use his brain for something other than trying to boss the world around.

He really likes these games and he’s been making great progress. Keep in mind, though, he’s still living on his own. Soon he’ll move in with another horse, which will be a whole new adventure. After all, not every roomie is going to be like Mom who could see no wrong in him.

For now, though, he has more than enough to take in without the complications of roommates. That day will come soon enough, but at least he’s beginning to realize the world is bigger than he once believed.

One step at a time, right? Welcome to Best Friends, Amir!

Help us take care of more equines by sponsoring a Best Friends horse.