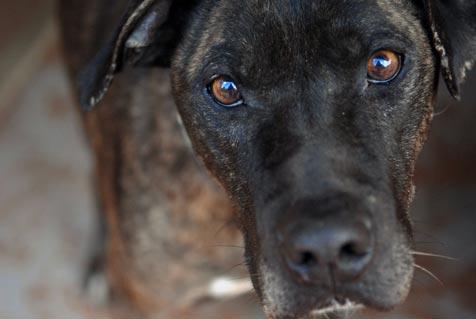 A good neighbor can make life a whole lot sweeter. They invite you over for dinner and a movie now and again. They take care of your pets and water your plants when you’re on vacation. They teach you not to scramble for safety whenever you encounter a new toy. Well, that is if your neighbor happens to be Cupid!

Pit bull friend moves in next to the Vicktory dogs

Cupid is a Best Friends pit bull who now lives among the Vicktory dogs. He came to Best Friends years ago after spending his whole life on a chain. He wasn’t alone, either. There were 50 other dogs chained next to him. All were neglected horribly. The highlight of Cupid’s previous life was trying to gobble some occasional food off the ground before the other dogs could make it disappear. Poor guy!

Call it a testament to his laid-back nature, but Cupid doesn’t carry any baggage from the old life. He’s a totally mellow, happy dog. Which makes him a perfect next door neighbor for the Vicktory dogs.

In the area of the sanctuary where the Vicktory dogs are living, there was room for a few extra dogs. Cupid got to move in as a role model of sorts. The caregivers picked him because he’s so relaxed. He doesn’t feel the need to go into orbit every time there’s a change in the décor or an alteration to the daily schedule. He simply shrugs and says, "Whatever. It’s cool." Cupid’s neighbors the Vicktory dogs may arch their eyebrows at his bizarre mannerisms (you know, like being OK with change), yet wait and see. He’ll start rubbing off on them in time. You can’t help but feel more at ease around this guy. And soon, who knows. Maybe they’ll all get together and throw a pajama block party?

Keep up regularly with the Vicktory dogs by bookmarking their page!