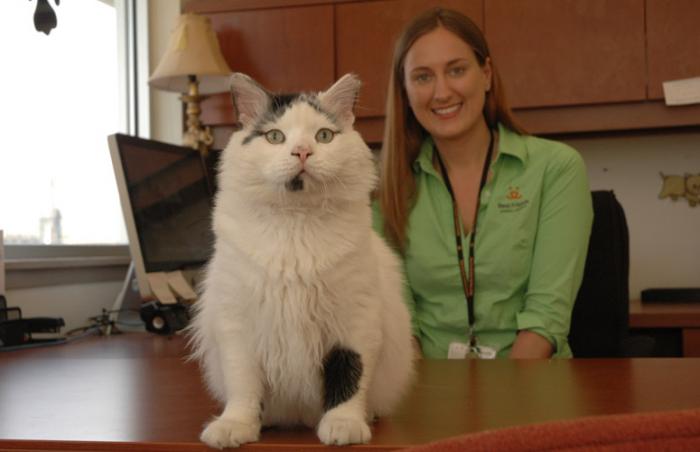 Four thousand, six hundred and sixty-five. That's how many feline lives were improved, or even saved, in 2012 through Best Friends' San Antonio Community Cat program.

Thanks to a generous three-year grant from PetSmart Charities, Best Friends has partnered with San Antonio Animal Care Services (ACS) in an effort to save free-roaming cats' lives through trap/neuter/return (TNR). One of their thousands of successes is a cat named JJ. 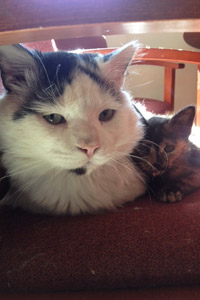 You could say JJ was a bit of a troublemaker. So much so, that when all the cats in his colony were fixed through the Community Cat program, his caretaker refused to allow him to return. Instead, she wanted to keep him confined to a crate. So Bethany Heins, Best Friends' Community Cat program coordinator in San Antonio, spoke to the woman who agreed to relinquish him.

JJ has now become the ACS administration building office cat - and he's taken to his new job with gusto. No longer a bully, he has taken on the role of foster mom to Gracie the kitten, whom he grooms, sleeps next to, and plays with. He also plays with the two office ferrets and begs for belly rubs.

"Our program is kind of nontraditional, in that it's a mix of field TNR and the Feral Freedom model," says Bethany. "About 25 percent of the cats that go through the program are community cats that have entered San Antonio Animal Care Services."

She and Evelyn Zuniga, the Community Cat program assistant, get those cats spayed, neutered and returned to their original neighborhoods. Then the real work begins. In 14 specific zip codes identified as home to the highest number of cats who end up at ACS, the pair scout the area, talk with neighbors, and work to fix entire colonies.

"This program is specifically designed to target cats that are at high risk of entering the shelter," says Bethany. "We want to identify those cats and intervene, ideally before they make it into the shelter." 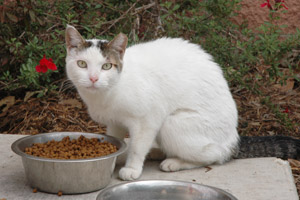 All that effort has truly made a difference. In slightly less than a year, their team exceeded their 3,500 goal by fixing nearly 4,700 cats. Additionally, ACS had a record-breaking 83 percent live release rate in January 2013.

Now they are gearing up for year two, when they hope to spay/neuter another 3,500 cats and reduce feline shelter intake by 10 percent in their 14 target zip codes.

In fact, the Best Friends program has proven so successful, ACS has started their own TNR effort, focusing on other San Antonio zip codes.

"I think that the biggest success we've had since the program started was the public interest. With the trap loans and our surgery numbers, we saw the public really embrace this program and the concept of TNR," says Bethany. "So basically what we wanted to happen at the end of this grant year happened in the first couple months. We are just ecstatic about that."