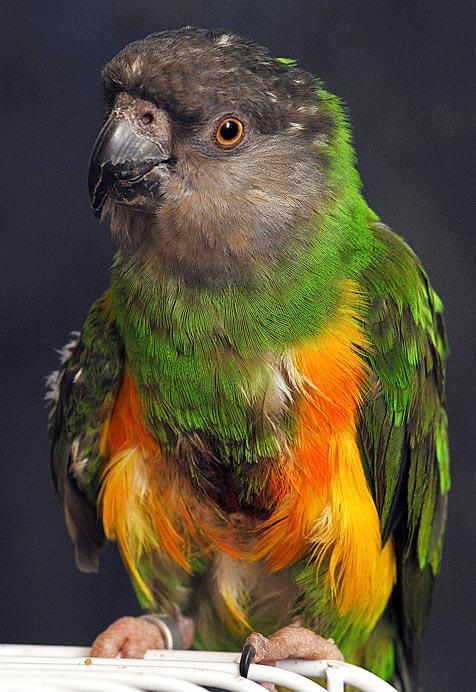 Senegal parrot injured by ceiling fan gets a fresh start

In the wild, healthy birds don’t often collide with objects. In a home setting, though, the rules change a little. There’s less room for maneuvering, strange furniture to avoid, and—worst of all—ceiling fans overhead. Sad to say, Maxine the Senegal parrot crashed into one in her home.

Ceiling fan tangles can be fatal to a bird, and while Maxine lived through it, she was pretty banged up. The crash broke her wing, which then healed crookedly. Also, after the accident Maxine started to pick obsessively at her chest feathers. Plus, she developed an unhealthy fear of people. Whenever her family approached, Maxine would leap down from her perch in terror. After trying for years to help her past these troubles, Maxine’s family made the hard decision that she might be better off elsewhere. So she came to Best Friends.

Almost right away, something interesting happened. Except for a couple of brief, edgy moments when she was trying to get her bearings, Maxine started coming out of her shell. Within days, she was cuddling with people. Um, huh? Her family—who were experienced with birds—could hardly believe the news. But it’s not so crazy as it sounds. You see, birds are very complex creatures. It’s possible that Maxine associated a whole host of bad emotions and memories with the home where she was injured and where she lost her ability to fly. Whatever the reason, she’s now improving by leaps and bounds.

She has also backed off on the feather picking and her wound is healing over. She’ll never fly again, but she isn’t in any pain from the broken wing. And there won’t be any ceiling fans in her future. Way to go, Maxine. And welcome!