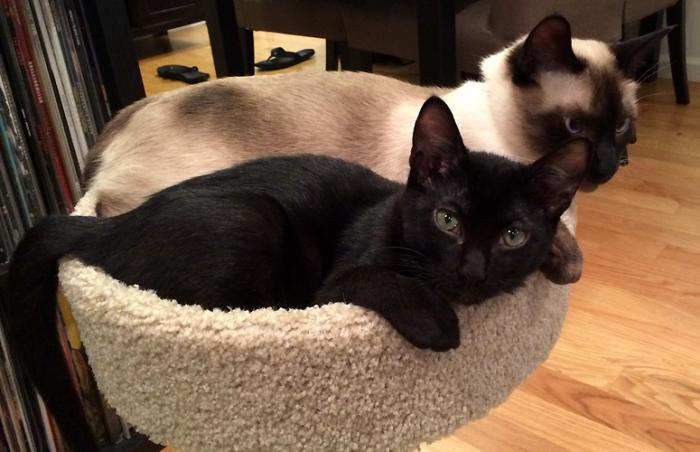 Siamese cat gets the best birthday present ever 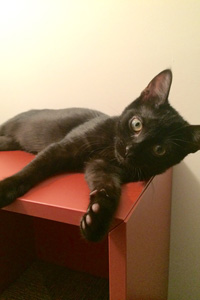 Rachel VanCleave and Derek Anderson are pretty fantastic pet parents. The couple planned to celebrate the birthday of Panda, their Siamese cat, by heading to PetSmart in the SoHo neighborhood of New York City to pick out toys for him. But before they even got there, they set the wheels in motion for getting Panda something much better than toys. “We joked on our way there that if they had a black kitten up for adoption, we’d get Panda a little brother instead,” says Rachel.

Birthday present for their Siamese cat

Rachel and Derek had been talking about getting a second kitten for a while — not for them, but for Panda. “We noticed that Panda’s activity level was pretty high and that he could use a companion during the day when we are at work,” says Rachel. And while they hadn’t set out to take the leap and search for a kitten yet, they’d already begun dreaming about what they’d look for if they did (pending Panda’s approval, of course). Rachel says, “We knew we wanted a black kitten. They often get overlooked at shelters, but they are so beautiful and majestic.”

Best Friends–New York happens to have adoptable cats and kittens — not only in foster homes, but also in a few permanent locations, like PetSmart in SoHo. You can see where this is going.

Levi was only in the world a few weeks before he lost his home and ended up at Animal Care & Control of New York City (AC&C of NYC). All Best Friends–New York pets come from AC&C of NYC, and Levi, a teeny tiny black panther of a kitten, was being cared for by Best Friends staff and volunteers.

Once Levi was big enough to be neutered, he was ready for the next phase of his life — a forever home. So staff got him set up in Best Friends’ little corner of the SoHo PetSmart. Lots of people got to see Levi at the busy pet supply store, but it took Rachel and Derek, who already had visions of adopting a little black kitten, to immediately fall for him. Levi purred the moment they went up to his enclosure and they adopted him on the spot. 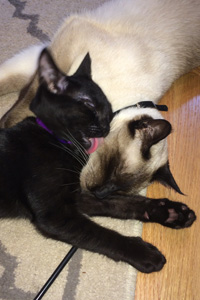 Once Derek and Rachel got Levi home, they took their time introducing him to the birthday boy, Panda. They wanted to make sure things would go OK, so on the first day, they kept Levi in the bedroom and allowed the cats to smell each other under the door. When that went well, they decided to see how the two would get along. They had nothing to worry about.

“Within 15 minutes they were playing,” says Rachel. Since then, the two have become inseparable. They love to chase each other around the apartment, taking breaks for napping and grooming. On most days, Panda will get so exhausted by Levi's kitten spunk that he will spread himself out on the floor, which prompts Levi to come lick his ears. Another favorite pastime is for the two to sit together and watch the world through the window.

“We can tell Panda is much happier and more content now that he has a companion in his life,” says Rachel. “Levi is the perfect addition to our family and we couldn't have asked for a better sibling for Panda.”

While Levi’s adoption was intended as a present for Panda, Rachel and Derek’s greatest gift was giving a once-abandoned, homeless city kitten a loving home for life.