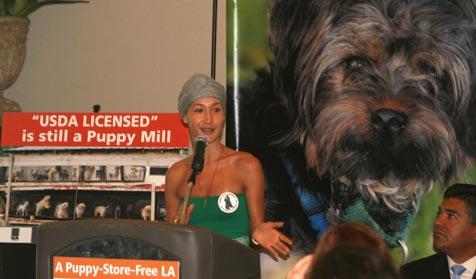 Stopping the sale of puppy mill dogs in Los Angeles

City Councilman Tony Cardenas is no stranger when it comes to speaking out for the animals. And Wednesday he didn’t mince words when he issued a challenge to join "A Puppy-Store-Free LA" campaign to stop the sale of puppy mill dogs in Greater Los Angeles.

Before a packed news conference at Luxe Hotel Sunset Boulevard, Cardenas joined actress Maggie Q, Chris DeRose, Last Chance for Animals; along with Julie Castle and Francis Battista of Best Friends Animal Society. In the glare of six television cameras, and scrutinized by the print and news radio media, Cardenas passionately laid out his case against those who would tolerate puppy mills and the stores who serve as their buying customers.

"My point to you is that when we act ignorant as a community, we are not doing the right thing," Cardenas said. "We must make the masses understand that we have a responsibility to care for our animals; and that when things get messed up, it’s usually because human hands have caused it."

Cardenas, who two years ago helped create a city animal cruelty task force, praised the work of Last Chance for Animals and Best Friends Animal Society for creating the campaign, which will be extended to more U.S. cities in the coming 12 months.

"Today is the beginning of a tremendous campaign, and needless to say, when it involves organizations like Best Friends and LCA, I’m happy to do what I can to raise awareness for animal cruelty. This work is done in the trenches, and in the case of LCA, much of it is done undercover.

"The goal is to make Los Angeles a model community for California and the rest of the country with regard to the sale, importation and breeding of animals. This program will help raise the awareness with families—that where they get their pets does matter.

"For years these groups have been the leaders in the investigation of puppy mills. When you see the horrible conditions that these animals live in, you wonder why operators of puppy mills have gone undetected for so long."

Cardenas said new legislation regarding pet store sales of puppy mill dogs is important, but not appropriate until all aspects of the legislation, including funding for enforcement is in place.

"I can promise to you sometime this summer we are going to have legislation before the council," he concluded.

Chris DeRose, founder and president of Last Chance for Animals, emphasized that puppy mills are all over southern California and in every part of the United States. Holding a small puppy mill rescue Yorkie named Lovey in his arms, DeRose described the horrible plight of puppy mill dogs, including the conditions under which breeding parents spend their entire lives.

"Even licensed breeders are allowed to stack cages on top of each other," he said. "Dogs have barely enough room to move around, and the ones stacked at the top defecate and urinate on those below them. No living being should have to endure conditions that you wouldn’t put on your worst enemy"

Actress Maggie Q, one of Asia’s top screen stars who cares for eight rescue dogs of her own, said: "If we can’t treat animals with kindness and compassion, how are our relationships going to be with each other? These are living beings who don’t have a voice in how we treat them."

The solution is simple, she pointed out.

"If we’re not demanding these puppies, then they (puppy mills) are not going to supply pet stores."

Francis Battista, longtime resident of Los Angeles and one of the founders of Best Friends Animal Society, described puppy mills as an ethical issue for the public at large.

"This isn’t simply a matter of sentiment from animal activists—this is an essential ethical question," Battista said. "The way we treat animals is a core value, and allowing this type of abuse, this type of pain and suffering is unconscionable.

"These are living beings, while puppy millers are motivated by greed and profit. Pet store sales from puppy mills place a tremendous burden on society and result in millions of dollars being spent on animal shelters. This is something that has to stop. And it’s going to stop here."

Julie Castle, director of community programs and services for Best Friends, asked those in attendance to look toward a future when the problems for animals created by puppy stores no longer exist.

"This is what the campaign is all about," she said. "It’s also about taking a message that the sale of puppy mill dogs in pet stores across the United States cannot continue."

Launch of "A Puppy-Store-Free LA" campaign follows successful undercover investigations and protests that have resulted in the Posh Puppy Store in Beverly Hills, Calif. to close its doors. It is also based on the fact that puppies, increasingly, are purchased on impulse or as accessories. Later, when pet owners discover that they cannot care for their puppy, they end up in shelters.