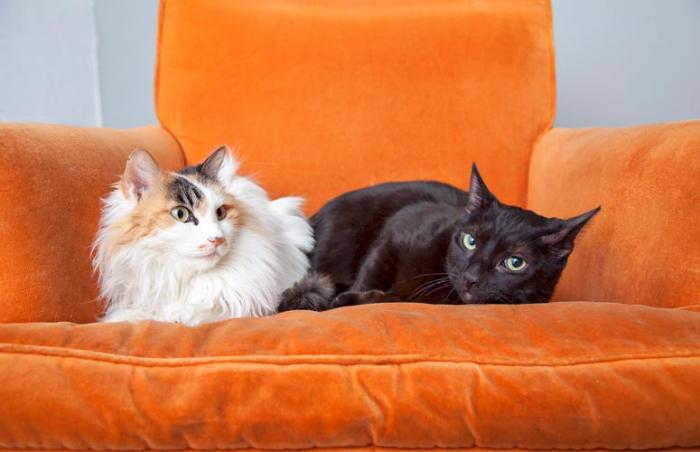 Surrogate mother cat turns out to be a male 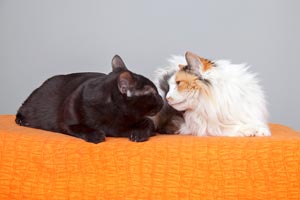 This is the time of year for giving thanks, and at Best Friends that means appreciating not just people who love animals, but pets who love and help one another, too.

At first, no one noticed anything different about Atlantis. The black cat arrived at Los Angeles Animal Services (just like many others do each day) with a litter of kittens. Shelter staff logged the little feline family into the computer system — a mother and her seven-week-old kittens — and placed them in a cage. But when it was time for the mama cat’s examination, it became apparent that the black cat wasn’t a mama at all. Atlantis is a boy.

Atlantis was so sweet and caring with the kittens (and had clearly taken good care of them) that shelter staff and volunteers began calling him “Papa Bear.” Soon “his” kittens were all adopted, but Atlantis remained. So he came to the Best Friends Pet Adoption and Spay/Neuter Center in Los Angeles, where he’s stepped out of his role as a surrogate mama cat and into one for which we’re just as thankful.

Best Friends–Los Angeles takes in hundreds of cats and kittens each year from Los Angeles Animal Services as part of the Best Friends’ No-Kill Los Angeles (NKLA) initiative, designed to bring Los Angeles to no-kill status by 2017. That means saving a lot of cats. Staff and volunteers at the center spend hours every day with pets, keeping them happy and healthy while they wait for homes. But sometimes animals step in to help in ways that humans can’t.

Atlantis moved into one of the adoption center’s free-roam rooms and soon asserted himself as official greeter and feline caretaker to the rest of the cats. Janette Nevils, the center’s lead cat caregiver, explains that whenever a new cat is introduced into the room, Atlantis comes over and waits for the cat to come out of the carrier. “He has a special little meow, almost like a chirp, saved especially for newcomers,” Janette says.

While Atlantis is just being his friendly self, his greetings go a long way toward helping other cats feel better about their new surroundings. “Going into the free-roam room with other cats can be intimidating for those used to being in their own space,” Janette says. “Atlantis makes them feel more comfortable.”

Though he’s a big six-year-old boy, Atlantis especially loves roughhousing with young “tweens” — cats who are no longer kittens, but are not full grown yet either, and who are almost always full of energy. “He runs around playing with them,” Janette says, “and he loves to snuggle up with them, too.” 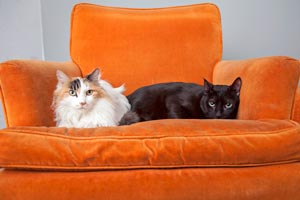 While Atlantis seems plenty happy making friends with the felines who come and go from the adoption center, everyone’s rooting for him to find a home of his own. While younger and perhaps more colorful cats get adopted quickly, adult black cats often have a harder time because they don’t immediately stand out when adopters look at several cats. While Atlantis’s favorite way to interact with people is to roll over onto his back and offer his big furry belly for petting, he hangs back when new people come into the room, letting other cats have the spotlight.

How Atlantis ended up caring for a litter of kittens is anyone’s guess, but one thing’s certain. Until he finds a home, we’re thankful for him and the love he gives to others in need.