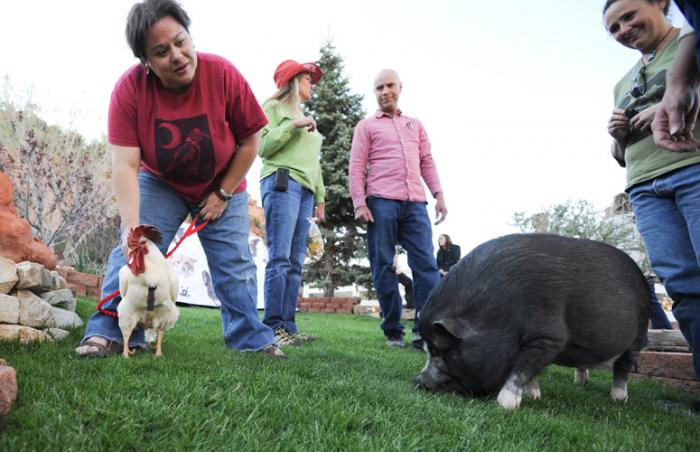 Taking roosters and a duck for a walk

Many people know that cats can be trained to walk quite happily on a harness and leash. In fact, it's quite common to see caregivers and volunteers out and about with the residents of Cat World. It's a little more unusual, however, to see a rooster or a duck at the end of a leash.

But, while the majority of people don't think of roosters or ducks as pets (let alone as the kind who can go for walks), Carmen Smith, manager of Wild Friends, the wildlife rehabilitation area of the Sanctuary, says that they are both very smart and trainable animals (and, yes, pets). It's even possible to harness-train a rooster in one or two sessions - provided, of course, you have some yummy treats to motivate them.

Walking roosters and a duck on a harness 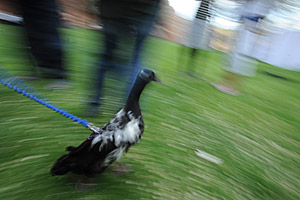 So far, the caregivers at Wild Friends have successfully harness-trained three roosters and a duck. The latter, Amelia, is, for lack of a better term, sort of an odd duck. She was raised with turkeys rather than with other ducks. As a result, she doesn't fully understand that she's not a turkey herself, and she's a little socially awkward around members of her own species.

But Amelia isn't so odd, really. She certainly has her share of friends, including wild turkeys who tend to hang out by her enclosure, and a yellow golden pheasant who is her potential new roommate. And, because Amelia really likes to be around people, getting harnessed up for a little stroll has become a bit of a treat for her. She also has a distinct advantage when it comes to walking. She is a runner duck (a breed of duck that runs rather than waddles), so she zips right along once she gets going. 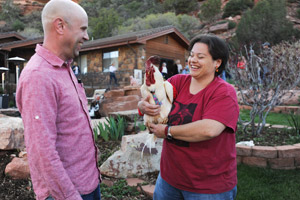 The walking roosters, Gandalf, Sam and Saruman, may not have speed on their side, but they sure know how to strut their stuff. They were once abandoned in a box in the freezing cold and suffered some permanent frostbite damage to their combs. But, despite their ordeal, they are very friendly with people. Gandalf, a handsome white leghorn rooster, is especially charismatic and well socialized.

Carmen says that she loves putting on Galdalf's harness and taking him to various events at the Sanctuary. It's a good opportunity to show people that roosters can be really sweet, especially when they are not in a henhouse where they often feel the need to protect the hens and defend their territory. And, a well-trained rooster can go a long way toward defeating the stereotype that chickens are unintelligent creatures.

In addition to these perks, Carmen explains that there are other distinct advantages to harness-training roosters and ducks. First and foremost, it's fun for the birds. It also provides mental stimulation and enrichment for the animals in that it gives them an opportunity to forage for food as they would in the wild. This means that they get to act like roosters and ducks while still being under the supervision of their caregivers.

But one heads-up before you strap a harness onto your feathered friend. Walking roosters and ducks is actually a bit like walking cats. After putting a harness on them, like a cat, your feathered companion will likely lead the way and expect you to follow in his or her path.