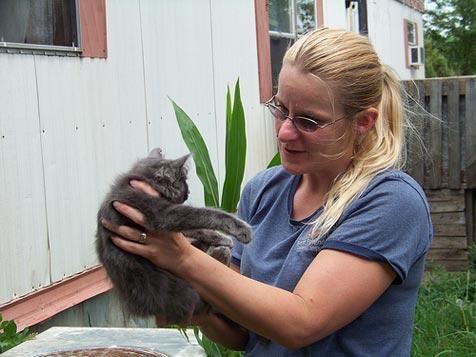 Shelly Kotter, manager of Best Friends’ Feral Cat Program, is used to talking to cat-loving ladies as well as people angry about feral cats digging in their gardens.

But when she looked out into the audience at a July 14th feral cat workshop at the Depot Deli and Lounge in Shenandoah, Iowa, she saw some new faces. There to learn more about something called trap/neuter/return were city council members, animal control officers and police department representatives from 20 different Iowa communities. Some had driven several hundred miles to attend the workshop.

"It’s an exciting trend I see in Iowa," Shelly says. "It’s not just residents. It’s your elected officials – the people you turn to when you have a problem. The room was full of people. It was amazing."

Trap/neuter/return (TNR) is the only proven way of keeping feral cat numbers under control. Cats are humanely trapped, taken to veterinarians to be spayed or neutered and vaccinated, and then are returned to their living space, where volunteers continue to feed and care for them. Veterinarians tip one of the cats’ ears to show they’ve been altered and are part of a managed feral cat colony.

Iowa’s city officials seem to think so, too. When they heard about what was going on in Randolph, they simply had to find out more.

It all began a few months ago when the tiny town of Randolph instituted a $5 bounty on free-roaming cats. Best Friends quickly dispatched a team to Randolph to turn city officials on to TNR instead. The bounty was removed and since then, with the help of Best Friends, a Nebraska-based group called Hearts United for Animals and local volunteers, more than 100 cats have been spayed or neutered.

People liked what they heard, and it’s making a big difference for feral cats. Over in Red Oak, a city about 50 miles from Randolph, the procedure was to hold feral cats for several days and then euthanize them. But earlier this week, Red Oak city officials approved pursuing funding for a TNR program.

Shelly will soon travel back to Iowa to give a TNR presentation to the Shenandoah City Council. And she’ll be a guest on an hour-long talk show on Iowa radio station KCSI-FM.

It’s likely that more Iowa towns will jump on board the TNR bandwagon. "They’re moving forward at a very fast pace," Shelly says. "People are really listening in Iowa."