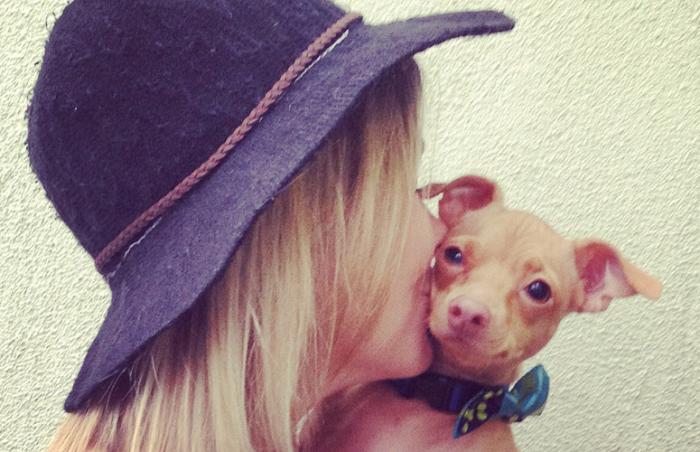 The second pet in our series of videos, which happen to be the first PSAs ever to air on Instagram, is Tuna, the three-year-old Chiweenie whose overbite makes him look a bit like Mr. Burns from "The Simpsons."

Tuna was found abandoned on the side of the road in San Diego. A rescue group took him to a farmers market in Los Angeles, where he caught the eye of Courtney Dasher. Charmed by the four-month-old pup's sweetness and physical differences, Courtney initially fostered, then adopted her best friend.

In December 2010, I met Tuna at a farmers market where he was being shown for adoption by a private rescuer. He was an insecure four-month old Chiweenie puppy with a gigantic overbite, coupled with other unique physical features. It was obvious to me that he was unloved and in need of a good home. However, I wasn't in the position to adopt because of my demanding schedule, so I decided to foster him instead.

Then, on the night before returning him to his rescuer, he fell asleep cradled in my arms with his little head on my shoulder. When I awoke the next morning, he was sound asleep, in the exact same position. I knew in that moment that I just couldn't let him go.

Three years later, he has developed into a confident dog full of charisma and personality. He enjoys getting his picture taken, and he loves to play in the yard with his favorite toy, Colin. He is the best cuddlier, and if he had it his way, he would stay in bed with me all day. Tuna is my best friend, and I can't imagine my life without him.

I wish that everyone could know the kind of special bond that Tuna and I have. Rescued animals are so grateful and appreciative to be saved, and as a result, they make the greatest, most loving companions. Adopting will be one of the best decisions you will ever make.