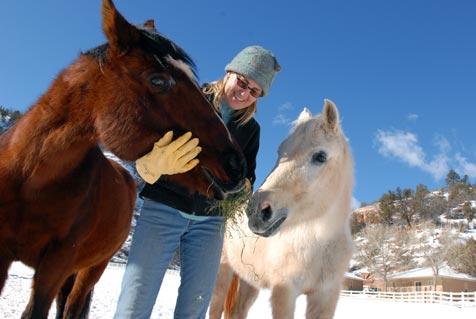 Cliff the horse was once paid a rather unusual compliment. Best Friends' horse manager Jen Reid described him as being "as laid back and mellow as a horse can be, and still be breathing." OK, so maybe he’s not the life of every party, but what he might lack in pep, he more than makes up for in wisdom and kindness.

Honest to goodness, Cliff is the sort of horse who couldn’t be mad at somebody if he tried. Neither could his long-time sweetheart, Yasmine. They are an older couple who came to Best Friends recently after their person was no longer able to give them the quality of care they needed. They’re a bit skinny in their old age, but the caregivers at Best Friends are already working up a special diet to try and put some of those pounds back on.

Horses who are easy to love

In the meantime, Cliff and Yasmine are winning over the hearts of all they meet. Everybody loves them, and they love everybody else right back. In fact, Yasmine will even stop in the middle of a meal and say hello to a visitor. That’s surprising for a horse! (Admittedly, Cliff does draw the line there. He’ll introduce himself properly after lunch, thank you very much!)

Yasmine has the most captivating big black eyes. She looks up from whatever she’s doing, fixes these gigantic puppy-dog eyes on you, and you melt. She enjoys the company so much, you almost feel guilty not stroking her head for hours at a stretch. Jen had something else to say about this pair: "They are the sweetest horses ever. I mean Ever!" They really are.

So, want to know the secret to a long and happy life? Cliff and Yasmine could offer a pointer that’s worked for them: Find somebody to love and grow old with. Makes the sunsets all the brighter.

Adopt a horse from Best Friends.