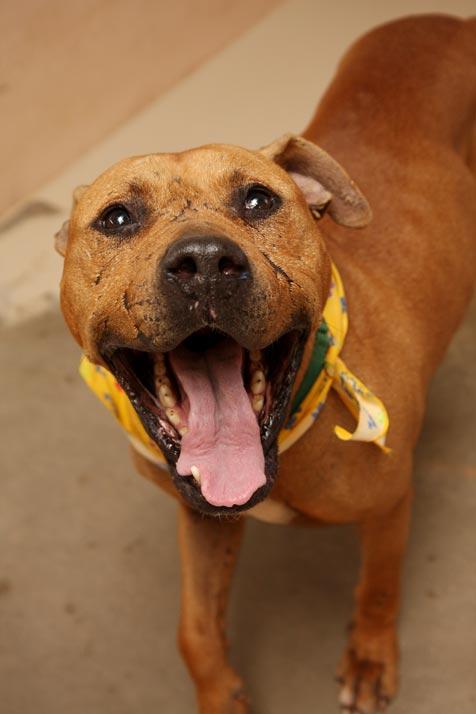 Ah, summertime at the sanctuary. Once the temperature approaches triple digits, the wading pools, sprinklers, water games and shade coverings come out. And there’s Lucas the Vicktory dog, frolicking in the snow. …

Lucas and his toys

Okay, so it’s not exactly snow. But from a distance, the padding from dozens of stuffed animals, shredded and scattered, looks a whole lot the same! Lucas has always been an enthusiastic fellow. He knows how to get the most out of life, including play time with his toys. Want to give him an early birthday present? Send him a gigantic teddy bear and he’ll love you forever. Yeah, it may not last very long, but many thrills are short-lived. (Roller coaster rides, for example.)

Lucas has been that same happy, goofy dog ever since arriving at Best Friends. He’s the kind of guy who can make you smile on the worst of days. Tax audit headed your way? Say hi to Lucas and you’ll feel like you’re in Disneyland. This is a dog who wakes up excited every single morning. He craves being the center of attention, loves people, and lives for play. How can you not feel good around a guy who does a dance of joy every time you walk in his play area?

After nearly a year and a half at the sanctuary, Lucas is still making friends whenever possible. He’s always been a crowd pleaser, hamming it up for visitors and film crews alike. Not many dogs out there like to hop up on their dog house to be closer to the action. "Hey you! I’m up here!" But that’s Lucas, through and through.

Like all the Vicktory dogs, however, even Lucas has had some issues to work through. Maybe he doesn’t seem the type, but Lucas has shown a little fear in the past when visiting new places. In relocating to new play areas, for example, he even had difficulty eating until he grew more accustomed to his surroundings.

With help and encouragement, Lucas always manages to come out on top soon enough. Even so, his trainers and caregivers have been working hard to help him past those fears and hang-ups. The only thing constant is change, right? Lucas will be much better off if he can gain confidence with new things, as well as to overcome any other problems that may hold him back.

As such, dog trainer Ann Allums, along with the help of other trainers and caregivers, has come up with a life care plan for each of the Vicktory dogs, including Lucas. This is an ongoing, ever-changing plan that adapts to their needs. Included in the plan is everything from life priorities (training goals), training logs, sleepover records, assessments, and so forth. The life priorities are rewritten every week, depending on what needs attention.

For example, in the beginning they’d work on simple stuff with Lucas, like sit and down; then later added something a bit harder like riding in cars. In time, they moved on to stay, then loose leash walking, and so forth. All along, Lucas has made progress with confidence. He’s now moved on to some trickier stuff, such as Canine Good Citizen (CGC) training. The goal of the life care plans for each of the Vicktory dogs is to "bring out the best potential in all of them," Ann explains.

All the little details and results from the training go into a thick green binder. This provides a way to track progress and help reevaluate direction as needed. The great thing about this type of training is that it’s tailored to each dog. Lucas is a love sponge of the highest order, and he thrives on training and attention. Other dogs have a different MO. Thus, each has a life care plan that reflects his or her own individual quirks and needs.

The best part for Lucas is that he isn’t even aware he’s in a training program at all. For him, it’s just one big day at the park after another. He continues to live for visits from caregivers and is always on the lookout for new faces. Even though he can’t greet visitors in person (part of the court order on the Vicktory dogs), Lucas still enjoys saying hello through a fence. One volunteer, in fact, sat outside his play area one day and sang to him—oh, Lucas was in love!

So whether it’s licking the faces of his caregivers, or whipping up a toy stuffing snow storm in July, Lucas continues to be one happy dog. And if his caregivers have anything to do with it, that will only improve from here on out. What a character.

By now have you completely fallen for Lucas? If so, consider sponsoring one of the Vicktory dogs.