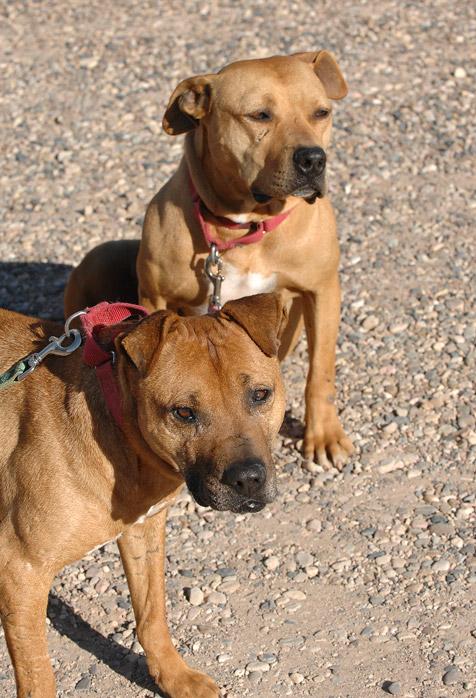 On the off chance that somebody decides to start, say, a giraffe sanctuary near Best Friends, there are at least two dogs who would hardly bat an eye during a day-trip visit: Vicktory (former Michael Vick) dogs Oscar and Squeaker! "Cool!" they’d probably say. "A funny-looking horse with a crazy-long neck! What’s next on the tour?"

Squeaker and Oscar have had a lot of practice over the last few years, especially during the past year, with meeting new faces, including all different sorts of animals. When you live at Best Friends, you have a rather wide spectrum to choose from. There aren’t many other places where you can hope to lay eyes on horses, pigs, dogs, cats, parrots, rabbits, wildlife and more all in a single setting. And Oscar and Squeaker have been around almost every one of them. They’re getting to the point where they can handle new situations, and new faces, rather well.

Here’s the thing, though. It hasn’t always been this way. These two dogs have been more bashful than most. For a long time, in fact, they didn’t even want to go on car rides. Now, however, that’s all changed, thanks in part to Best Friends vet tech Annick Popowich, one of their close buddies.

Squeaker had surgery at the Best Friends clinic a year ago. During her subsequent two-month stay in the clinic after surgery, Annick got to know her well. "There was something very special about her," Annick says. "I fell in love." It was a love that would inspire her to do everything she could to help Squeaker, along with Squeaker’s best buddy (and many would say boyfriend), Oscar.

For the past year, Annick has spent lunches each day of her work week, plus one weekend day, taking the two dogs to every possible different location she can think of around Best Friends. The two dogs are still staff-only (due to a court order), so they can’t interact with visitors. However, they can certainly spend time around horses, goats and all the rest in order to boost their confidence with new situations.

"I take them everywhere," says Annick. "I just try to expose them to everything possible." Now the two dogs love car rides, and look forward to wherever Annick takes them.

Supporters of the Vicktory dogs

To be clear, Squeaker and Oscar have always had an army of supporters in the form of caregivers, trainers and other Best Friends staffers who interact with them on a regular basis. What Annick did was help build that army even larger, bit by bit, by introducing them to new staff members all around the Sanctuary. To know these dogs is to love them. Before long, Squeaker and Oscar had a support network like no other.

And now that support network has gotten a lot more colorful — with vibrant reds, brilliant blues, and dazzling yellows. Oscar and Squeaker have become office dogs over at the Parrot Garden!

"I was always thinking that they would benefit from becoming office dogs," says Annick. Oscar and Squeaker have been spending lunches at parrots from time to time for quite a while. For now, it’s only one day a week, with plans to increase the frequency in the future as they become more familiar with the setting.

In addition, several of the parrot staffers have been working with Squeaker and Oscar during free time. Parrot staffer Kevin Johnson, one of the supporters, assists in training sessions with Annick to help the dogs get ready for their Canine Good Citizen test (court requirement before they can be considered for adoption). Wendy Hatchel, another caregiver at parrots, takes the dogs for walks, as do others. All of the parrot staffers pitch in whenever possible.

One of their favorite spots is to hang out in the corner of parrot manager Jacque Johnson’s office to watch the foot traffic pass by from the other side of the doggie gate. In all honesty, both dogs remain initially shy by nature. Yet they’re improving all the time and adjusting to new situations more quickly.

One might suspect that the rather loud, raucous office building over at parrots might prove a bit unnerving. However, have the dogs been bothered by all the squawking? "Not at all," Wendy insists.

Confident though they’re becoming, Squeaker and Oscar still do prefer a few familiar trappings. One of them that’s rather funny happens to be their eating habits. "They will not eat inside the building," Wendy says. It’s either outside on the sand or not at all.

By way of exposing them to yet another frontier, Annick has brought the dogs on sleepovers to the Best Friends cottages and cabins. Visitors at Best Friends might come across a little surprise if they turn through the guest book pages. Each visit, the dogs leave a paw print in the book. "I think that they would do great in a home," says Annick.

Update: Looks like all the hard work has paid off! Getting one step closer to her own happily ever after, Squeaker just passed her CGC exam and can now be considered for adoption.

Read about how Best Friends is working to help pit-bull-type dogs around the country with the pit bull terrier initiatives. Pit bull terriers and pit bull mixes are battling everything from a media-driven bad reputation to legislation designed to bring about their extinction. Best Friends hopes to end discrimination against all dogs. Dogs are individuals and should be treated as individuals.