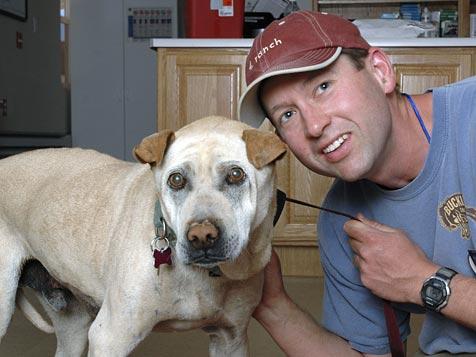 Volunteer helps save life of dog suffering from bloat

An intuitive volunteer just might have saved Spencer’s life. Some of you may recognize Spencer, the rough and tough guy who became a social marshmallow in his older years. Here’s what happened.

Rob Park was on his first visit to Best Friends. After taking the sanctuary tour, he wanted to pick out a dog for a sleepover. One caregiver suggested Spencer. Spencer is energetic, friendly, and hadn’t been on a sleepover in a while.

When Rob picked him up at 4 pm, Spencer looked great. After bringing him home, however, Rob noticed that Spencer couldn’t seem to get comfortable. Lots of pacing and fidgeting. Rob decided to take him on a walk that lasted all of about 50 feet. Spencer kept zigzagging frantically all over the path. He seemed to be looking for everything and nothing at once.

Even a car ride couldn’t calm down this usually cool cucumber. He constantly kept twisting and turning. Back at the cottage Spencer began gulping water, throwing it up, gulping more. Others might have written all this off as the behavior of an antsy dog in a new environment. But for Rob, something didn’t feel right. He decided to call for help.

Once the Best Friends vets took an x-ray, they saw that Spencer needed emergency surgery. He had developed bloat, a stomach condition that Spencer would most likely have not survived if Rob hadn’t been keeping close watch. Luck, fate, or something else put these two together and Spencer is now on the mend. Thanks, Rob!