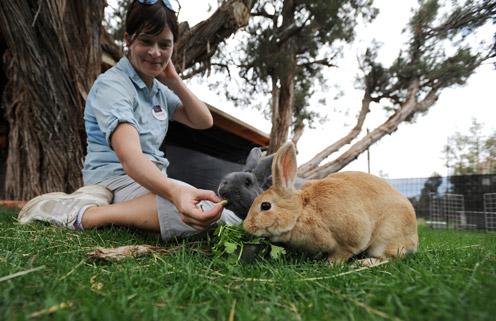 Courtney Link is something of a globetrotter when it comes to helping animals. Her travels have taken her the world over, where she has volunteered her time and talents any way she can to benefit the animals. Her most recent trip, which ended up being a visit to Best Friends Animal Sanctuary, began in a room full of dusty books at an animal rescue in India. Little did she know how dusty her journey would eventually become. 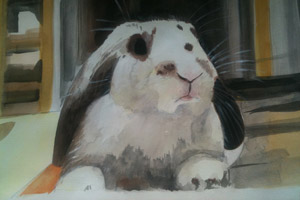 Born in England and living currently in Hong Kong, Courtney is an online art instructor for an international art school. She has six adorable rabbits she adopted from the Hong Kong Rabbit Society. An accomplished artist, Courtney volunteers her talents to the rabbit society by painting portraits of pet rabbits. The clients who hire Courtney pay her a fee, which she passes along directly to the rabbit society.

Volunteering at the Visakha Society for Protection and Care of Animals

Almost exactly a year ago, Courtney was volunteering at the Visakha Society for Protection and Care of Animals in India (VSPCA). The people at VSPCA were thrilled to have Courtney around and asked if they could draw on her background as an instructor. They hoped she might be willing to develop a few workshops and other educational pieces for them.

Courtney was happy to help. As part of her efforts, she spent time pouring through a roomful of old books, magazines and other tracts they had on hand. She was looking for any information she could find that might be of use. During this on-site research, Courtney laid eyes on a small pamphlet, covered in spider webs, dust and other grime, titled "How to Start an Animal Sanctuary." It was a Best Friends pamphlet! "That was what ignited this whole Best Friends vision," she says.

Courtney dusted off the dirt and cobwebs and read the pamphlet cover to cover. Then she found the Best Friends website and read some more. The following January, she began making plans to visit the Sanctuary in person. "I wanted to see if such a place really existed," Courtney says.

An interesting detail about Courtney: Despite all the world travel she’s done thus far, she had never chosen, at any point in her life, to get a credit card. No worrying about maxed-out plastic for this gal! Only problem was she began to realize that for this particular trip it would be hard to get where she needed without a rental car, which meant getting a credit card. She decided to bite the bullet and sign up for one at last.

Unfortunately, here’s where things got complicated. After she was approved for the credit card, Courtney was told the card wouldn’t actually arrive until the day of her flight. Panicked, she waited for the mail before heading to the airport. The mail came in time, yet her card wasn’t in it (it would arrive the next day). Undaunted, Courtney had no intentions of giving up. She refused to miss her flight and hopped on the plane anyway, determined to make it to the Sanctuary one way or another. 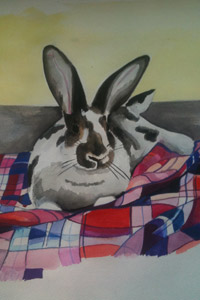 Her flight arrived in St. George, Utah, some 80 miles from Best Friends. To those who aren’t aware, it’s not exactly easy to get from St. George to Kanab using public transportation. Courtney looked at all her possibilities and, in the end, decided the only way she could make it to the Sanctuary was by bicycle. Yes, you read that correctly!

Her partner back in Hong Kong, Peter Moss, called and texted her multiple times to give encouragement and provide weather updates and other information. She was certainly grateful for Peter’s support from afar, yet she still needed to find a bicycle.

The kind manager at the hotel Courtney was staying offered to let her borrow a used, damaged mountain bike. Courtney took the bike into a shop for some much-needed repair, where technicians fixed it up as best they could in the limited time available. "Are you sure there’s not a better way to get there?" they asked.

In the very short time they had to work with, technicians were able to get the bike up and running for the most part. The front brakes still didn’t work, nor did about half of the gears, but Courtney wasn’t about to back down. That would be good enough. She made plans for a 3:30 a.m. departure the following morning.

It took her two full days of cycling through steep hills and hot, dusty, windy desert summer heat, but she made it! Now there’s some raw determination for you. "I had about 10 minutes to wash the dead bugs off my face and change my shirt before the tour [of the Sanctuary]," she says. But hey, what did a little road dust matter at this point? She’d arrived!

Determined to see the rabbits at the Bunny House 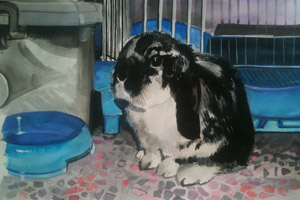 A rabbit lover at heart, the Bunny House, the rabbit part of the Sanctuary, was one of the main destinations she had in mind, and that’s what kept her going through the long haul. "I just so wanted to see the bunnies here," she says.

Courtney might have had to pedal her way across Southern Utah to reach Best Friends, yet once she arrived and started meeting people, Courtney was able to park the bike for the four days she stayed in town. Within 10 minutes, she was overwhelmed with support and encouragement from visitors and staff members. "It was really quite touching," she says. Courtney had rides everywhere she needed to go, often from the staff at rabbits, including a ride back down to St. George when it came time to hit the airport again.

While in town, she spent four glorious days volunteering with the rabbits at the Sanctuary. She helped socialize rabbits, cleaned their play areas, and even assisted in officially launching the rabbit sleepover program! The program had barely been assembled, as it turns out, and Courtney did three nights with two rabbits each for sleepovers. Those just so happened to be the first, second and third rabbit sleepovers at Best Friends. "It was wonderful," she says about her experience.

With good reason, everybody made quite a fuss around Courtney and all she went through in her quest to reach Best Friends. But for Courtney, she prefers to put all that attention back on the animals. "It’s all for the rabbits," she says.

Come visit Best Friends and help make a difference for animals in need.