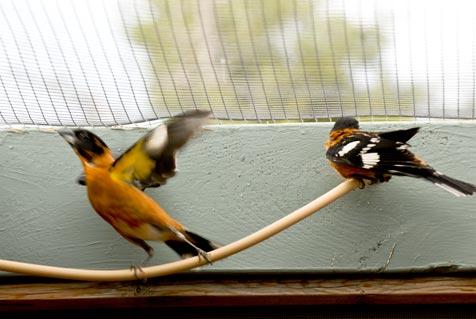 It’s a never-ending problem birds face — the window. Reflecting open sky and leading birds to think there is space in which to fly, the window accounts for an untold number of bird deaths and injuries. Wild Friends, the wildlife rehabilitation center at Best Friends, has treated many of the injured, most recently two black-headed grosbeaks.

The first bird hit the window at the Best Friends’ Welcome Center. The bird incurred head trauma, which resulted in a loss of coordination and an inability to balance on a perch. The second came from the nearby town of Kanab. The collision caused the birds’ air sacs, located around his head and chest, to over-inflate, which prevented him from being able to close his wings and therefore fly. It also prevented him from being able to eat on his own. Best Friends’ licensed wildlife rehabilitators, Carmen Smith and Barbara Weider, therefore had to tube feed the bird.

Treating the birds for injuries

Both grosbeaks received anti-inflammatory drugs, which, over about a week’s time, helped reduce the swelling they both experienced from hitting the window and helped deflate the air sacs in the second grosbeak. But the first was still not able to balance well, and so Carmen and Barbara instead tried some homeopathic remedies, which they often use to treat head and nerve trauma. The remedies worked.

Carmen and Barbara thought that perhaps they could house the two males in adjoining enclosures. But this being the breeding season, when males vie for mates, the two wanted nothing to do with each other. "They’re in that territorial, competitive state of mind," Carmen says.

Carmen and Barbara have therefore kept the two separate, and both have been moving into progressively larger enclosure as they recover. Each now occupies his own small flight aviary, where both are reconditioning themselves for life back in the wild.

Get info about wildlife rehabilitation.